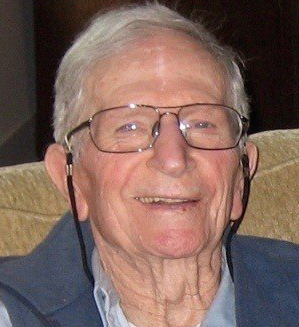 Gene Bourdet, a native son of Hollister, died of natural causes on Friday, May 31st, at Sutter Memorial Hospital in Roseville, CA. Born November 24, 1922, Gene grew up on Southside with brother Len and sister Janis. The family moved into town during Gene’s high school years where he made all league in both baseball and football. Gene attended junior college in Salinas for a short time before going to Oakland to work in the shipyards. In 1943 he was drafted into the military and was sent to Bozeman, MT for training. There he met his future wife, Eileen Olson.

After the war, Gene returned to Bozeman, married Eileen, and finished his education at Montana State College while playing quarterback for the Bobcats. At this time, he and Eileen began a “team” of their own (5 children over the next 13 years). His career included coaching at the high school level in both Fairfield, MT and Livingston, MT followed by a return to his alma mater in Bozeman.

He (with Eileen) made the full circle back to Hollister in 1985 where he worked for his childhood friend, Sonny Paullus, in his real estate company at Ridgemark. For the next 30 years (Eileen passed away in 2008) they enjoyed living near sister Janis Rose and nephew David Grimes (wife Colleen) in the close knit community of Gene’s hometown.

As his health declined the difficult decision was made in2015 to move to the Roseville area and live with family. Gene was a Rotarian for 48 years and a faithful member of the Immaculate Conception Church. He will be greatly missed.

A service will be held at 10:30 AM on July 2nd at the Immaculate Conception Church in Tres Pinos, CA. Military honors and a reception will follow. For more details or to view a video interview of Gene sharing highlights with his family, visit the website www.grunnagle.com . Click on obits and then on his photo.