Beside German, San Benito struggled to keep pace with Stevenson.

San Benito’s Andrew Colton and Brian Wall each carded a 48. Greg Moreno carded the fourth-lowest score for the Balers with a 49.

The San Benito boys volleyball team evened up its league record at 1-1 with a three-game sweep of Salinas on Tuesday.

David Hawks led the Balers with 30 assists, and Dylan Lomanto led the way with digs.

“We are starting to play really well,” head coach Sam Klauer said. “The team is getting comfortable and getting up to speed.”

San Benito never lost a set during the day.

On Wednesday, the Balers continued their success and beat Sobrato 4-3.

Skinner opened the day with a 6-3, 6-3 straight-set win. The double teams of Francis and Trillo and Jacob Panger and Sonny Singh each won as well.

Francis and Trillo won the closes match of the day for the Balers. The pair opened their match with a first set loss, but won the final two sets 6-4 and 10-4.

The Balers travel to Palma High at 4 p.m. Thursday to continue league play. San Benito will makeup an early-season rain-out to Carmel at 4 p.m. Friday in Carmel. 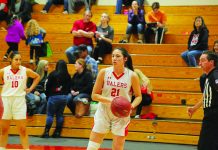 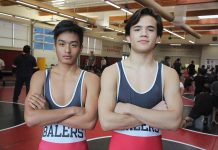