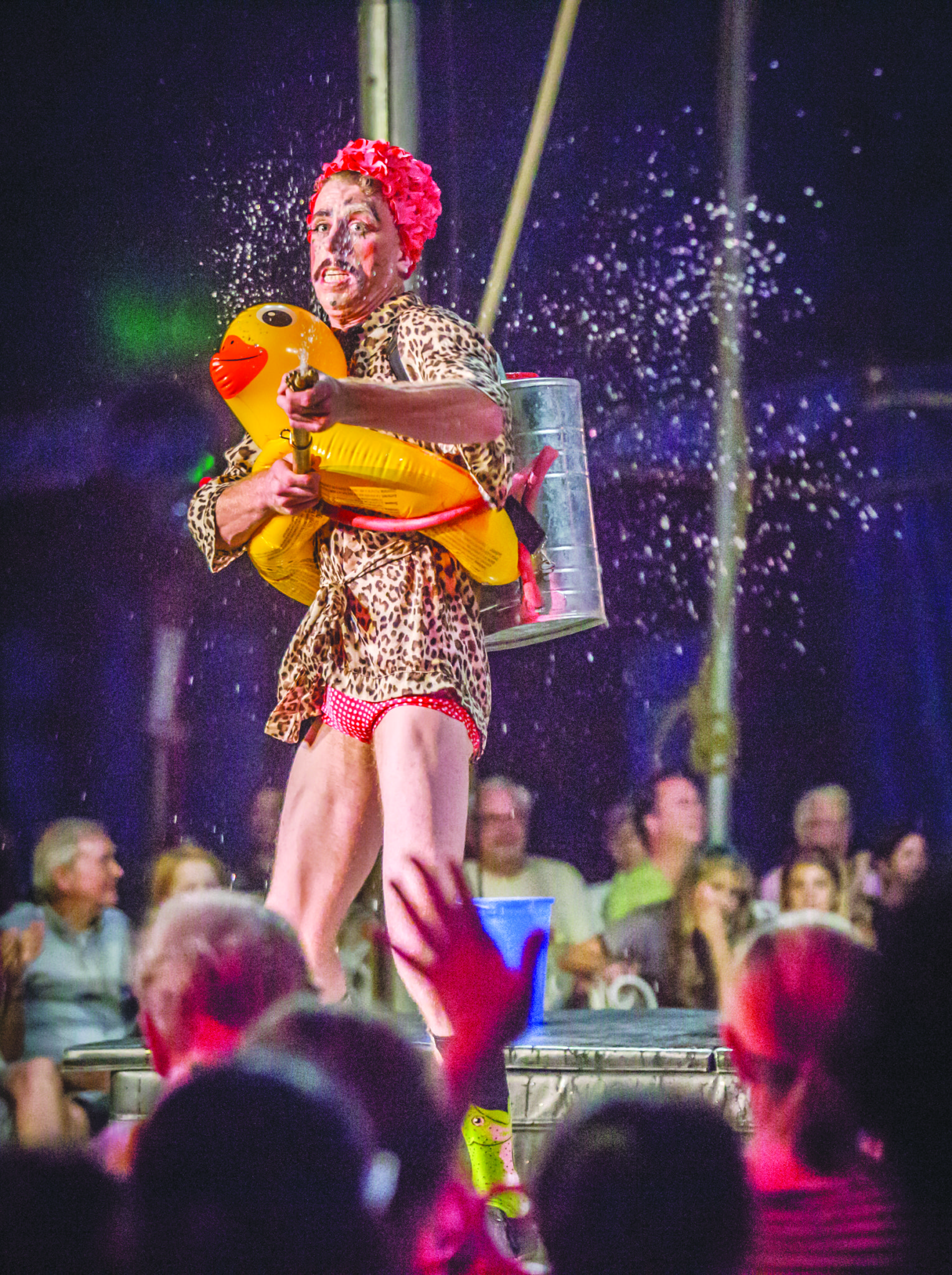 For the past 10 weeks, a classic, red-and-white circus tent has popped up across small towns in California. Inside is Flynn Creek Circus, and from Aug. 25-28th, the troupe is taking over the soccer field at the San Juan School.

Flynn Creek is a company out of Mendocino that counts jugglers and acrobats amongst its performers. Their shows this week are part of a fundraiser sponsored by the Community Fellowship Center.

And although their home base is a long ways from San Juan, Artistic Director and co-founder Blaze Birge is no stranger to the bucolic parts of the state.

She and her partner recruited around the world and across the states to find the best performers in their very particular fields. Although Flynn Creek has only been on tour a few weeks, most company members have been working at their disciplines for a decade or more.

The show is particularly light-hearted this year, according to Birge, and a good choice for families. Comedic acts join aerial artists and jugglers in a show that lasts just about two hours, depending on the improv guy.

“It’s all the ingredients of a typical show done in a new way,” Birge said.

The big top circus tent and the caravan ticket stand instantly induce nostalgia. But the dark blue interior of the tent hints at the contemporary vibe of the performances. Flynn Creek’s shows don’t include animal acts, and each season is a little different.

This year, Selyna Bogino is one of the troupe’s international talents. Bogino is a foot juggler — arguably the best foot juggler in the world, according to Birge — who has won online acclaim with her act.

But while in California, the Italian performer said she feels like a tourist.

“It’s like in the movies,” she said of the towns she’s seen so far.

Starting on Thursday, audiences will catch Bogino’s uncommon act, which consists of the performer on her back, juggling basketballs and carpet rolls across her hands and feet.

For Bogino, circus performing is a family tradition that stretches back four generations. Her mom is also a foot juggler, but it was her dad who started coaching her in the discipline when she was eight years old. She’s been performing since she was 15.

Her brother, Danny Bogino, is also a juggler and part of the Flynn Creek company this year. Other performers come from all over, including the Bay Area and Washington state. On Tuesday, the group was busy setting up their eye-catching tent.

Flynn Creek is unique, according to Bogino, in that the performers are also the crew. Even Birge, who’s handling the promotion of the show, has a trapeze act.

“We do everything that needs to be done,” Bogino said with a laugh. “We set up the tent and sell popcorn. It creates a nice bond.”

Tickets to the show are available on the troupe’s website — flynncreekcircus.com — with a presale ending before their first performance on Wednesday.