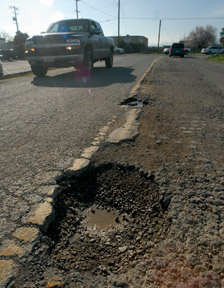 Voters in the June election signaled a lingering lack of trust when it comes to public officials’ use of tax money.
That was among lessons learned when San Benito County voters rejected Measure P, with 59.5 percent of the vote in favor of the special tax when a two-thirds approval was needed. The proposal, widely supported by local government leaders and floated by the Council of San Benito County Governments, called for a half-cent sales tax over the course of 30 years to raise about $240 million for local road projects.
Locals seem to fully understand the severely poor nature of road conditions in the county, and local politicians were widely supportive of the tax measure. So what went wrong?
What supporters of the measure failed to fully comprehend is that trust has become a festering concern for the local electorate. Additionally, competition hurt the yes campaign, with more local tax measures expected on the local ballot in November.
Timing of campaigning was a problem, too. Supporters launched a relatively late campaign a couple of months before the June election. This type of messaging clearly needed more time and thought, particularly as it pertained to campaigning toward the wider public beyond core business and political groups, beyond mostly thoughtless political signs littering our landscapes that are all too common these days. The campaign also could have embraced its opposition—which was inevitable with a tax of that significance—and targeted the more conservative areas of the county.
Because everyone, especially residents in the rural parts of the county, should understand the need for road repairs. The local road conditions here are embarrassing. The highway infrastructure is decades behind in a town flooded by commuters needing decent highway infrastructure.
So ultimately, it looks like many of the skeptics were against the details in the COG plan more than anything else or they just plain didn’t want to spend the money. There were questions over using the funds on bicycle lanes, the three-decade length of the term, and broad language in the measure that could allow more wiggle room than voters might like.
After all, proponents were asking for hundreds of millions of dollars over three decades in a relatively poor community with an imbalanced economy and growing pains. It wasn’t chump change to say the least, and many of the engaged primary voters were well aware of three more tax measures planned for the fall. Supervisors actually tabled one of them, plans to float a 1 percent sales tax in unincorporated San Benito County, after seeing the Measure P results.
In November, on top of the tabled county proposal, local leaders have supported floating an extension to the 1 percent sales tax in the City of Hollister. On the school side, the Hollister and San Benito High School districts have separately broached plans for facility bond measures to follow up on recently approved issues in those crossover districts.
The city and school districts might face a surprise come November similar to the way many Measure P supporters undoubtedly felt weeks ago.
Those entities will have to deal with all the uncontrollable emotions and rhetoric that come with a presidential election. They’ll have to compete with one another while campaigning to many of the same voters, thousands of whom are public employees who may rely on such funding for stability. And now it appears voters’ trust is eroding in local government leaders’ decisions.
A big part of the blame probably goes to Gavilan College for misusing millions of dollars in locally approved bond funds, meant to go toward a permanent college in Hollister, on a police academy in Coyote Valley. San Benito High School trustees didn’t help, either, by spending more than $12 million in general tax money on sports projects right after gaining narrow approval on Measure G, the $42.5 million facilities bond approved in 2014. School officials vowed not to spend the bond money on sports projects. But voters are smart enough to realize that it’s all taxpayers’ money, whether from the general fund or bond measure, and that $12 million spent on athletics is $12 million not spent in classrooms.
This summer and fall, the city and two districts have a lot of work to do if they hope to gain approvals in November, while it’s unclear if and when COG or the county might jump in the tax fray again. Whichever agencies head to the ballot, their best chance is to put together a comprehensive, honest plan detailing how they plan to spend the money—along with other general funds an approval might unlock for other projects—and why they’re good investments for voters.

Local Boy Scouts of America troops wrapped up the...