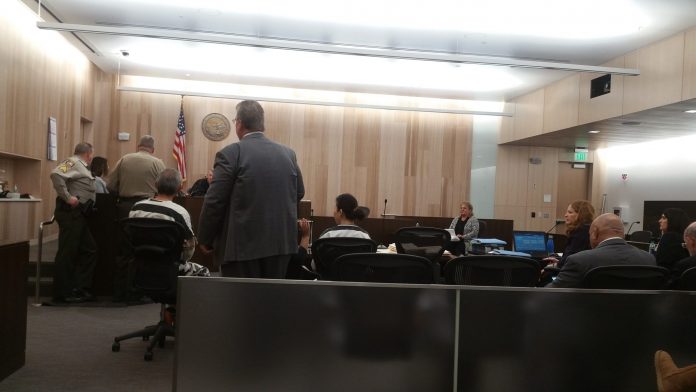 Husband, female suspected of her murder

Remains believed to be of missing Hollister woman, Yoon Ji, the proprietor of a local laundromat, have been found, according to the San Benito County Sheriff’s Office.

“Through investigative leads we were able to locate who we think is the victim,” said Operations Captain Eric Taylor. “We found the remains of who we believe to be Mrs. Ji. The autopsy has not been done yet, probably tomorrow in Santa Clara County.”

Taylor said the remains were found Wednesday off of Salinas Grade Road between San Benito and Monterey Counties outside of San Juan Bautista.

“We had some investigative leads that led us to the area of Salinas Grade Road far into a canyon and the dog was alerted over a grave site,” said Taylor.

The pair charged in Yoon Yi’s apparent murder are her husband, Sang Ji and Jung Choi, a woman who Sang Ji initially referred to county law enforcement as a cousin.

Each of the suspects spoke through a Korean interpreter and were given a bail of $2 million plus $10,000.

Sang Ji, who operates Hollister Laundromat in the city, was assigned a public defender after Sang Ji said the laundromat has been closed since his arrest and he has no money for an attorney.

Choi, who presiding Superior Court Judge Steven Sanders said, “had means,” was given time to consult an attorney. Choi, through the interpreter, said her brother from South Korea was supposed to consult with a attorney at the consulate Wednesday, but she had, as of Thursday morning, not heard from him.

Judge Sanders scheduled a brief continuance for both suspects on December 28 at 9am.

Outside the court room, Gregory Michael Laforge, the public defender assigned to Sang Ji, said he had not yet introduced himself to his client and had nothing to add.

Holding up a thick file, he said, “I don’t have anything to say right now, I need to review the discovery.”

At the courthouse, Taylor said they are confident the right suspects are in custody.

“We are confident we have the two people who are responsible,” he said.

Yoon Ji was reported missing on December 2 by Ji’s daughter and her sister who live in Los Angeles. The daughter told the San Benito County Sheriff’s Office that she had not heard from their mother since Monday, November 27. This was odd as they had daily communication with her up until that time.

On Friday, December 1, she received an odd message from her father, Sang Ji, stating her mother went to South Korea unexpectedly. She contacted family in South Korea who said the mother was not there, and had not contacted them to go there. The female and her sister were concerned so she drove to Hollister from Los Angeles to confront the father.

The daughter arrived in Hollister and contacted her father at the family home. The father was in the company of a female identified as Jung Choi. Sang said Jung was a cousin, but she was unknown to the daughter. The daughter became increasingly concerned for her mother after her conversation with Sang and Jung. She contacted the Sheriff’s Office to file a missing person report on her mother.

Since then, the San Benito County Sheriff’s Office Detectives had been working on the case. Leads were developed to show there was a likelihood the missing female had been killed. A search warrant was authored and was served on December 6. The Federal Bureau of Investigation Evidence Response Team and Santa Clara County Human Remains Detection dogs and their handlers assisted.

Evidence was located to suggest the female was killed. Both Sang Ji and Jung Choi were arrested and booked in the San Benito County Jail on suspicion of murder and conspiracy to commit murder.

Outside the closed Hollister Laundromat, owned and operated by the Jis, a bouquet of balloons is twisted around the doors. A hand-written sign reads: “Anyone who steals from this window or takes anything out from this window will go to hell have a hart [sic] four [sic] the person who is no longer with us. Thank you.”

Next door at the Smoker’s Paradise shop, clerk Lucy Delia said, “everybody is really shocked.”

Delia said she would see Yoon Ji at the laundromat and she was very nice.

“She was here everyday, every single day,” said Delia.

She would also see the husband, Sang Ji, who she said was “really nice” but it was the wife, Yoon Ji, who she would see more often.

“We are very shocked,” she said.