San Benito High’s five-set win over Monte Vista Christian—game scores were 22-25, 25-19, 25-14, 22-25, 15-4—on Sept. 28 wasn’t just another league match. It carried extra significance, as the Haybalers were hosting a Disabilities Awareness game. Each player on the team played in honor of a disability or someone they knew with a disability.

“It was really special,” Balers senior Annie Breger said. “In the beginning of the season when the team got together, coach (Emily Tonascia) had the idea of a disability awareness game because her older brother Joey has autism, and she thought it would be a good way to bring awareness to people with disabilities. Everyone grabbed hold of the idea, and it was really great and touching to be able to do something like this.”

All around the gym, the significance of the game was evident. The walls were adorned with posters and words from the players on the disability they were representing. Breger chose to represent epilepsy because someone close to her has been diagnosed with the neurological disorder.

Breger doesn’t usually need inspiration, as she is one of the more energetic players on the team. However, the middle blocker said there was something a little extra riding on the line against Monte Vista Christian.

“Knowing that this game was for everyone who couldn’t play made it that much more meaningful,” Breger said. “You walk around campus and see kids with disabilities, and I love it that I can interact with them. They’re genuine and warm hearted, and it makes me want to be a better person.”

Some of the San Benito High sports teams have a Pinkout Game to celebrate Breast Cancer Awareness month. Knowing the impact that publicity can bring to causes, Tonascia felt it would be appropriate to highlight Disability Employment Awareness Month, which is also celebrated in October.

“A lot of people don’t realize that,” Tonascia said. “And a lot of our girls are in the Circle of Friends program at school, and they’re really affected by students with disabilities. So it’s powerful for them to recognize people who would like to play volleyball but can’t play volleyball. Sometimes we make it a point to play for them.”

Even though the Balers didn’t play one of their better matches of the season, they still dug deep and managed to pull out a victory against a tough MVC team. Lauren Sabbatini, the outstanding senior outside hitter, had a team-high 14 kills. Breger had a high hitting percentage, and is playing the best volleyball of her career.

“In the last few practices, Liz (Fleming), coach and I have been working on hitting to the deep corners of the court,” Breger said. “We want to be real intentional on where to place the ball, and I think all the hard work is paying off. I can see it from the numbers, where I’m hitting better than the past few years. That is what I hoped would happen.”

Tonascia said the key to the resounding Game 5 win was everyone moving their feet to be in the correct defensive position to dig up attacks and make solid passes off the MVC serves.

“I think our serve-receive passers stepped up after the first game or two and really worked on getting their feet going,” said Tonascia, who also pointed to the attackers being aggressive and smart in their hitting selection. “And (setter) Kieley Hoskins played a really good game and had a lot of good sets and good energy. Annie Breger also did a solid job of staying in position and bringing energy to the team.”

The Balers saved their best for last—“If we played every game like we did our fifth game, the match would’ve been over a lot quicker,” Tonascia said—improving to a perfect 8-0 in league play following a three-game sweep of Alvarez last Thursday.

“We weren’t playing our best, but the fact that we still won truly shows what a good team this is,” Breger said. “Of course we have more things to work on, but it’s nice to know we’re able to pull through and pick each other up when some of us are having an off night.”

“The first half of league is all over, and it’s really cool we’re undefeated,” Tonascia said. “Hopefully it stays that way. “If we continue playing like the way we did in that fifth game, we won’t have a problem.”

San Benito is in the midst of perhaps the greatest three-year run in program history. The Balers are the two-time defending MBL Gabilan Division champions, and are an incredible 29-2 in league since the start of the 2015 season. However, the Balers take even greater satisfaction in playing for others and honoring them in words and action.

Two weeks ago in a celebration of people with disabilities, San Benito’s girls volleyball team did just that. 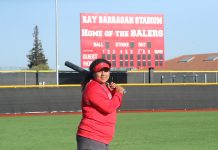