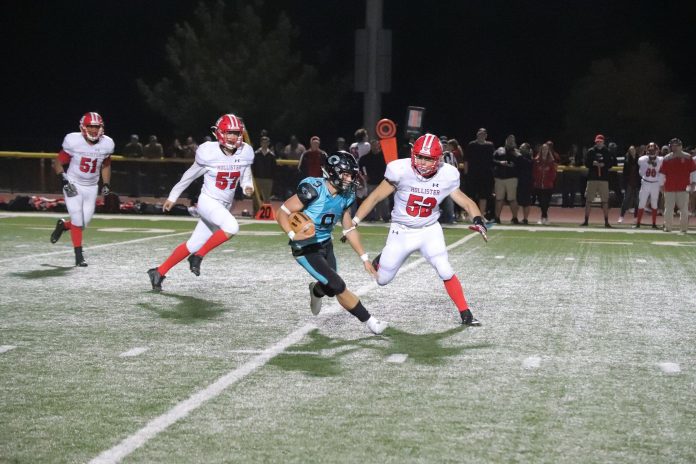 It wasn’t quite the comeback of the year for Christopher High, nor was it a monumental collapse for San Benito High. In a wild Pacific Coast League Gabilan Division game last Friday in Gilroy, it was the Haybalers that prevailed 34-28 over the Cougars in a contest that wasn’t decided until the final seconds.

At the half, it was bleak for the Cougars (3-2, 1-1). The Haybalers (2-3, 1-1) landed repeated haymakers, building up a seemingly comfortable 27-7 at the break. However, the Cougars stormed back, scoring three unanswered touchdowns before finally succumbing on downs on their own 28-yard line with 16 seconds to go.

“It’s a tale of two halves,” Balers coach Bryan Smith said after the game. “I give a lot of credit to them. There’s no quit in that team. We had to hold on until the very end. It feels good to win, but it should have been by a whole lot more.”

The Cougars were dead on offense, pushed around on defense and special teams. Meanwhile, the Balers backfield, led by running back Stevan Navarro (18 rushes for 100 yards and three touchdowns), methodically ran by, over and through Christopher’s defense while dominating the clock in the first half.

Navarro’s three TD game was his first three-score game of the year, one less than last season’s high of a four-touchdown game against North Salinas High.

“Getting our first conference win is a big deal for us, as it was time to turn the tide,” Navarro said. “After taking an ‘L’ last week (a 42-20 loss at Aptos), it’s a big turn from us. Next week we got the Prune Bowl (Gilroy High), which hasn’t been (played) since 2012, and we’re going to take that bell hopefully.”

Just when it seemed like this game was a rout, the Cougars caught fire in the third quarter, scoring three unanswered touchdowns against a seemingly deflated and exhausted Balers’ defense.

Christopher senior quarterback Ben Sanford went from Drew Carey to Drew Brees in one quarter. After struggling to move the offense in the first half, Sanford’s staked the team to three third-quarter touchdowns, eventually finishing 24 of 44 for 350 yards four touchdowns and two interceptions.

“At halftime, we had to sit down and think, (and) everybody needed to think about their jobs,” Sanford said. “They took that and we all went in and did the job. It’s a tough group of guys.”

A smiling Tim Pierleoni embraced his players after the game and didn’t give the impression of a coach who had lost a close game. Some losses can feel like victories.

“We made some adjustments at halftime and the kids came out and did what we needed them to do,” Pierleoni said. “I guarantee nobody felt like we were going to come out and play like we did, (because) that’s a very good football team over there. They’re well-coached with a lot of kids. They have twice as many kids as we do.”

Even with the comeback effort, the loss counts the same in the standings. At least, the moral victory took away some of the sting of losing.

“If there is one this would be it,” Sanford said. “This team showed more toughness than any Christopher team I’ve been with. To be able to play against a team of this caliber and do well is just incredible.”

Senior running back/wide receiver/defensive back Christian Davis had a busy night on both sides of the ball. Davis caught 15 passes for two touchdowns, including a 66-yard TD reception in the wild third quarter. On defense, Davis collected five tackles and one assist.

Senior wide receiver Jason Scirigione was one of Sanford’s favorite targets of the night. Sanford connected with Scirigione for a 57-yard TD in the second quarter and again for a 30-yard TD reception in the third quarter.

“Right when it came off my hand I knew it was a good play,” Wilson said. “On my first read, I saw the corner get burned. His hips were flipped, and Anthony (Mercurio) was wide open. I just had to get him the ball.”

“That was a bad call on me,” Pierleoni said. “I told the kids that at the end. I thought that they were going to come at us again and we had a chance to fake it and get a big play out of it. In the end, the coaches told me that kind of sparked us.”