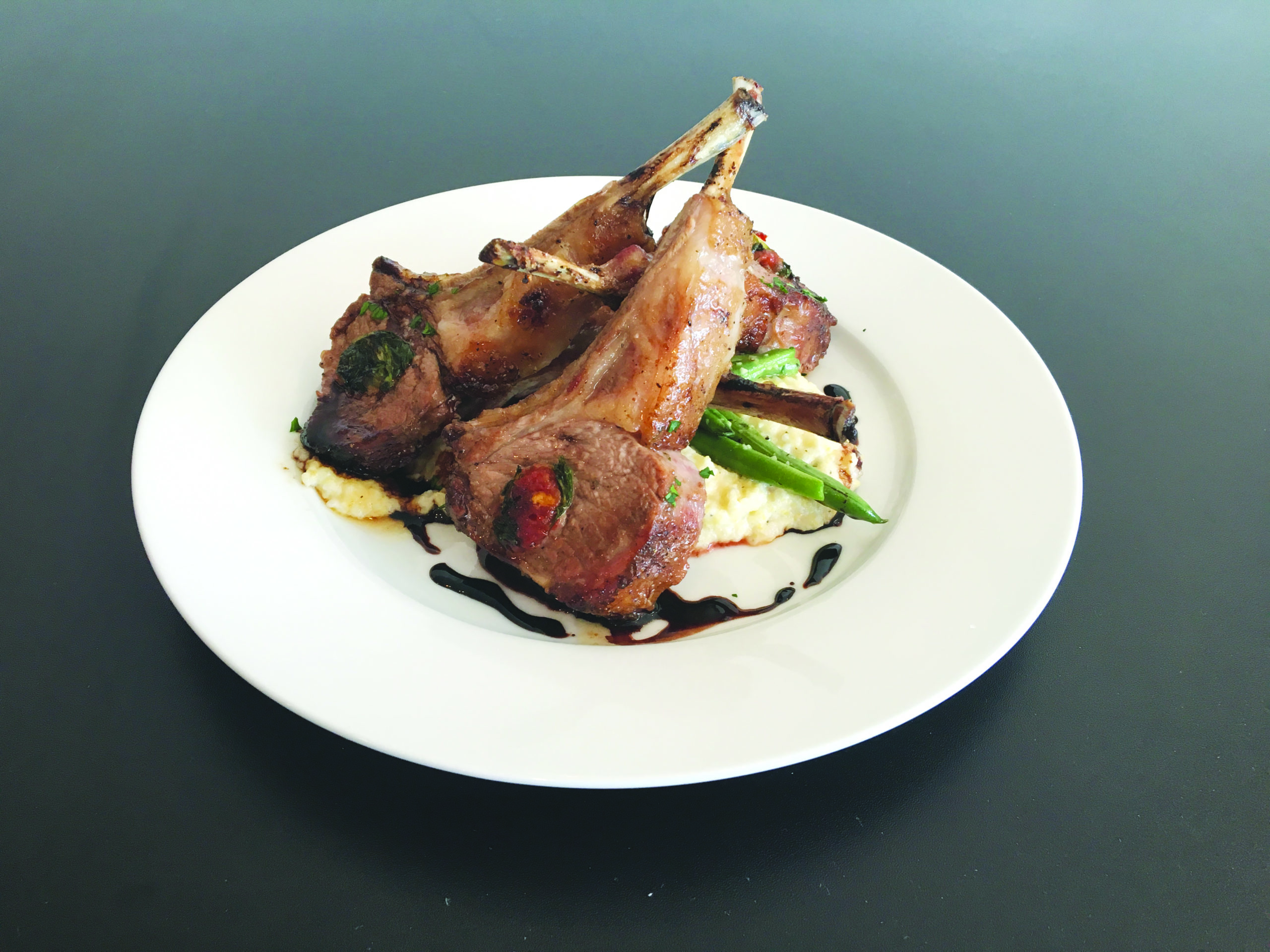 Dining at Cafe Thyme has been a weekly affair for Patty Lemon of Gilroy, who has been eating at the restaurant since its opening in July. “The food is incredible. It’s my fourth time,” says Lemon. “The quality of the food is distinctive.” Lemon says the one time she missed was because “the cafe was all booked.”

Cafe Thyme at 433 First Street in Gilroy is run by executive chef and owner Diane Sturla. Sturla, who also owns the eight-year-old catering company Just in Thyme, has always enjoyed cooking. She learned most of her culinary skills from her son, Collin Ferguson, who participated in the catering business for the first three years, she says.

“Kind of the opposite of what you expect—the son teaching the mom,” says Sturla. “I stood back and said, ‘I can learn from him.’”

The large uncovered windows at Cafe Thyme provide a lot of natural lighting to the front of the house, where the grey, black and white color scheme enhances the minimalist modern space, allowing the food to take center stage.

Cafe Thyme serves what Sturla likes to call “multicultural” California cuisine. For her, California cuisine brings different cultures into the kitchen and the mosaic of flavors they create reflect a blend which she finds quintessential to the area. Sticking with locally grown food is important to Cafe Thyme, whose menu is inspired by the changing seasons; they use organic, pesticide-free foods from nearby farms wherever possible. All their stocks and sauces are made from scratch.

Sturla says she owes a lot of her success to the team she’s built. Scott Murdock, Cafe Thyme’s chef de cuisine, was the executive chef at Cafe Marcella in Los Gatos, where they were awarded a Michelin Rising Star under his direction.

“I’m into cooking whatever is new and fresh and different,” says Murdock, who has been cooking with Sturla for two and a half years.

Always up for trying a new restaurant, our party decided to check out Cafe Thyme over the weekend.

Our meal began with tomato bruschetta ($5), featuring heirloom tomatoes from Swank Farms in Hollister tossed with olive oil, garlic and a fine basil chiffonade. The appetizer was served with fresh mozzarella beside a creamy Italian burrata, a more delicate semi-soft cheese that made for easy spreading on the small toasts.

Our party then enjoyed a light roasted beet salad ($8). A citrus dressing provided a nice contrast to the spicy arugula; the salad was finished with feta, thinly sliced fennel and triangles of colorful beets with that add a sweet, earthy flavor.

The soup, a bacon corn chowder ($5), was a light, broth-based chowder with carrots, celery, new potatoes and nitrate-free pancetta.

For the main course our party ordered two of Cafe Thyme’s most popular entrees. Taking advantage of the last fruits of the season, we went with the peach chicken ($18), a sliced chicken breast served over a bed of creamy risotto and topped with locally grown peaches from Andy’s Orchard in Morgan Hill. The sweet sauce, made from the peaches’ own juices, complemented the savory risotto.

Next on our list was the stuffed rack of lamb ($32). The tender lamb was stuffed with sun-dried tomatoes and baby bok choy, which enhanced the flavorful, yet mild lamb. The dish was served with green beans over polenta and drizzled with a balsamic reduction.

Our meal concluded with creme brulee ($9) and bread pudding ($9), which included a divinely fragrant sauce of run, brown sugar and butter to indulge the senses.

Currently, most of the cafe’s patrons, drawn by Yelp reviews, are flocking in from out of town. But Cafe Thyme offers refined flavors and a level of sophistication that South Valley residents will also appreciate.