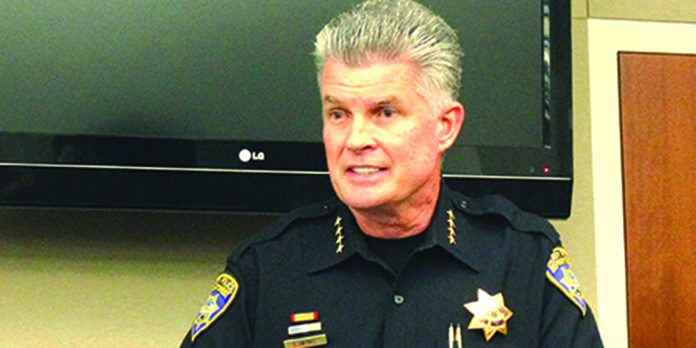 Gilroy Police Chief Scot Smithee stopped by the Garlic Festival law enforcement tent at “Gate 3” on Miller Avenue on his way home with his family about 5:20pm July 28. He was on US 101 just south of Gilroy about 20 minutes later when his phone and the police radio started to blow up with calls about “an active shooter” at the festival. He immediately turned around and went back to Christmas Hill Park.

The days since then have been an emotional roller coaster for the chief and his department, packed with non-stop investigation, public outreach and coordinaion of various agencies to provide services to the victims, interview witnesses and maintain a crime scene of the mass shooting that left four dead and 13 injured.

While local and South County residents are reeling from the tragedy, they haven’t hesitated to show their gratitude to Smithee and his officers. At an Aug. 1 vigil in downtown Gilroy Smithee received thunderous applause when he told the crowd that Gilroy will only grow stronger after the Garlic Festival shooting.

Smithee said he hadn’t responded to more than 100 requests for interviews from media all over the country. He sat down in his office with the Gilroy Dispatch following an Aug. 1 press conference. Below are excerpts from the interview.

Can you say a little more about officers Eric Cryar, Hugo Del Moral and Robert Basuino, who stopped the suspect?

My goal, my mission in life is to help people. And here’s a situation where people are in dire need of help and (the officers) went running to do that. I don’t think they thought about it. I mean they, they RAN. When the first shots started to ring out there was no delay. They ran toward those shots, and as soon as they came within sight of the suspect he turned and started shooting at (the officers). And so they stopped running closer and they engaged him with their handguns. So you have a suspect with an AK-47 assault rifle shooting at you, and you’ve got a handgun. And so those officers were at a really big disadvantage. And yet somehow they managed to stay calm enough to shoot in a manner that allowed them to hit that guy. And under those circumstances, to be able to shoot that accurately from a long distance and hit the—it’s remarkable. It’s truly remarkable.

From my perspective as the chief, looking at the way those officers handle that and how fast they responded and what they were able to do—I think they’re heroes. And I think they did a remarkable job to end that very, very quickly, because even seconds longer and we would have had more victims because that guy is firing into crowds of people.

As a longtime resident of Gilroy, how does it make you feel that something like this happened here, but also that it was somebody who grew up here?

I’m pretty shocked that somebody that grew up in the city of Gilroy is capable of doing something like this. I think Gilroy is a very special place. And the people in this town come together. The Garlic Festival is a perfect example: they come together to do things for other people. This is a town that gives back. This is a town that supports people. That is just part of the culture of who the City of Gilroy is. And we have incredible people here. I love the people here.

This one is a shock, but I also think that the people of our town are resilient. As horrible as this is, I think that people are going to come together, and in some way I hope they gain even more strength as we move forward in the future to not let this stop us from being who we are, and not let it stop us from doing events like the Garlic Festival where we raise funds to help people and fund different programs around town—the charities and community based organizations and sports teams and schools.

What is your impression of the community response to this tragedy?

I think people are hurting. The response toward us, toward the police department has been incredible, the amount of support that my staff has gotten and our officers have gotten. People want to show their appreciation. I can’t walk out of this building with people not wanting to stop me and shake my hand because they feel like we did a good job. I think we did do a good job but sometimes I get emotional when I think about it, because no matter how good of a job you did, people still get shot.

We’ve had some vigils already where people in the community come together in a big way. I think those (vigils) are healthy, and I think it helps bring us together. I think that, as horrific as this thing is, I think this is going to bring the people of our community even closer together than they were. In my opinion I think that ultimately will be a good thing. Even people in the community that have petty differences, when you go through something like this those petty differences suddenly don’t seem so important anymore.

Has this prompted the city or police department to revisit security procedures for large public events?

When an event like this happens anywhere in the country, or really anywhere in the world, I think it causes all of us to look at what we do and are we vulnerable to that kind of an attack. As an example, all over Europe (in recent years), people have been getting in trucks and driving through people in the walkways. Those are things that never happened before. So nobody (in law enforcement) thought of that. Well, we think about it now, and that’s affected how we do things here in Gilroy—not because of anything that happened here but because something happened over there

I think anytime something happens that causes you to re-evaluate if we are vulnerable and what are some reasonable steps we can take to help mitigate some of the risk. And the Garlic Festival is no example—we’re one of the most secure festivals or fairs that I’ve ever seen. And we still have somebody do something like this.

Honestly I never thought that would happen to me. I’d just as soon never have to deal with that. I’m not a media guy, it’s just not my thing. But when something like this happens at this magnitude, I can’t pawn that off on anybody else. It’s got to be me.

I pulled up to that first press conference and thought, “Oh my God. I’ve never seen so much media in my entire life.” There were at least four tiers of cameras all the way around, probably a hundred TV cameras. And I remember looking at that thinking, “I don’t want to be in this position.” I started off the interview by saying no police chief ever wants to have to do this. So what I tried to do is ignore all the cameras, and I tried to ignore the enormity of it all. And I tried to just talk to my community. Mentally, I tried to put myself in that mode that I’m just talking to Gilroy.

And it was hard. I’m getting better but when I talk about the officers or when I talk about the victims, it’s hard. I get really emotional in front of all those cameras. They ask me a question about the officers and I can feel it coming, trying to take a deep breath. I never wanted that role. And it’s weird because I’ve heard from people across the world, I’ve heard from people in other countries who are watching me on TV. It’s emotional because people, my friends and my family and my relatives, they see me and they see that emotion coming out. And then they get emotional. I don’t ever want to be on this stage again.

What do you think is the future of the Garlic Festival?

I think it needs to come back. I don’t think we can let one crazy person ruin so many lives, because he’s already ruined the lives of the people that he shot. We can’t allow him to ruin the lives of all the other people in town that this thing benefits. And I know the people in this town. I am confident that they are going to do everything they can to make sure that this thing goes again and that it survives. I’m confident that you’re going to get 4,000 volunteers next year. I’ll be there. My wife will be there. My kids will be there. We will do this. We’re not going to let this ruin this incredible thing that this town has and worked so hard for so many years to put together. It needs to go on.

It’s going to be hard. It’s going to be emotional. But if we can get another good year under our belts, I think that would go a long way to the healing process for what everybody is going through now.

We need to be strong. We need to come together and we need to not let this permanently affect us—we can’t let it. Otherwise evil wins. I, for one, am not willing to let evil win.

As a law enforcement officer have you ever been involved in an incident even remotely as large as this one?

No. Even just the response the law enforcement coming into town to help us—I’ve never seen anything like that before. It was truly incredible. I can’t thank the other departments in several different counties. I don’t even know who they all are yet. I owe each one of those agencies a debt of gratitude because they did not hesitate. There’s no way we could handle this by ourselves.

The FBI has been fantastic. I don’t know how the hell we would process that crime scene. Even the rest of the county resources isn’t enough to process that size of a place.

The City of Hollister closed out its summer-long 150th...
College

Seryna Esparza had to wait a long time before...