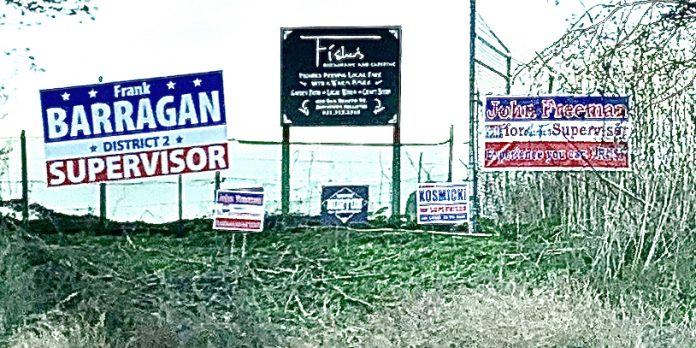 Unofficial, incomplete returns tonight showed one incumbent San Benito County supervisor— Mark Medina in District 1—headed towards election with more than 60 percent of vote, and another— Jaime de La Cruz in District 5—hanging on to a razor-thin margin, according to the county Elections Office.

With 100 percent of the precincts reporting, but hundreds of vote-by-mail ballots still to be counted, the 10:30pm primary election report showed four-term incumbent de La Cruz with just a 17-vote lead over one of his toughest opponents, teacher Bea Gonzales. Of the 5,276 registered voters in District 5, 1,145 votes—21.7 percent—had been counted.

Elections officials said all precincts had reported their vote totals by 10:30pm, but emphasized that hundreds of vote-by-mail ballots and provisional ballots in each supervisor district remained to be counted. In many cases, they said these numbers would be equal to or greater than the initial precinct totals.

The Elections Office expected these ballots to be counted Wednesday and Thursday.

With the results of approximately 29.4 percent of registered voters in the northeast-county District 1, incumbent Mark Medina was coasting to election to a second term, with 61 percent of the vote, over challenger Betsy Dirks, with 39 percent.

In the supervisor races, any candidate with more than 50 percent of the vote in the primary is declared the winner—there is no November election.

The five person race in the open northwest-county District 2, with votes counted that represent 32.3 percent of registered voters, political newcomer Kollin Kosmicki held a solid lead of 36.2 percent to 22.8 percent over Wayne Norton. If the percentages hold, these two would face each other in November. Planning Commission chair Valerie Egland followed at 16.9 percent, Frank Barragan had 15.4 percent, and San Juan Bautista Councilmember John Freeman had 8.7 percent of the precinct votes.