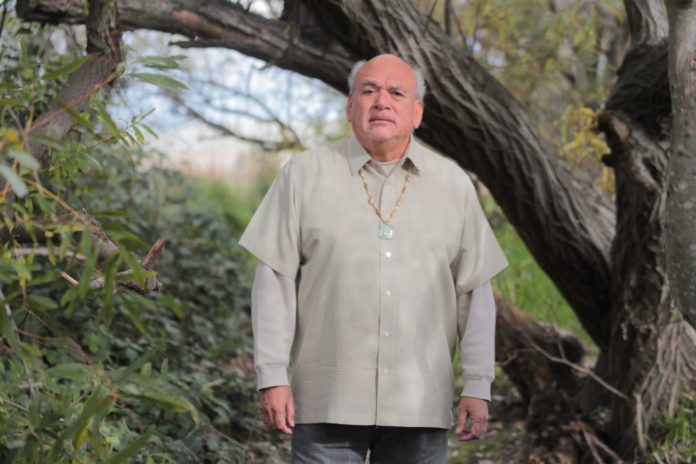 By: Nicholas Preciado • Reporter
January 5, 2017
265
0
A monument recently debuted at a regional Mission church honoring Native American ancestors, with roots in San Benito County, buried and then reburied in a mass grave.
Founded in 1791, the original Mission Santa Cruz church was demolished in 1885 and replaced with a new brick church, according to the Amah Mutsun Tribal Band linked to San Benito County. Because of the new church, 2,436 human remains were exhumed. The remains date between 1791 and 1871, according to the tribe. Of the remains, about 2,000 were ancestors of the current tribe.

After exhuming the remains, the church reburied them in a small mass grave in the Old Holy Cross Cemetery in Santa Cruz.

Amah Mutsun Tribal Band Chairman Valentin Lopez said the treatment of Native Americans by the missions was horrible from the beginning.

“To us, disturbing our ancestors is the greatest violation of our spiritual belief,” said Lopez over the phone. “They disturbed over 2,000 of our ancestors and then they just dumped them into a mass grave. That’s further evidence the church has never respected or has never given any thought to our ancestors as human beings.”

According to the tribe’s website, The Amah Mutsun Tribal Band is comprised of the direct descendents of the aboriginal groups whose territories fell under the sphere of influence of both Mission San Juan Bautista (Mutsun) and Mission Santa Cruz (Awaswas) during the late 18th, 19th and early 20th centuries. The Amah Mutsun tribe occupied the San Juan Valley for thousands of years before the Spanish arrived in the late 1700s.

Members of the Old Holy Cross Cemetery organization wanted to bring recognition of the reburied remains to the public’s attention for many years, the tribe’s press release states. Then in 2014, Santa Cruz community members Bill and Brigit Simpkins, Jim and Debbie Thoits, and Norman and Kathy Poitevin came up with the idea to establish a memorial to those buried in the mass grave.

According to the press release, research by Norman Poitevin showed that half of all burials were of children under age 12.

The memorial design was agreed upon after a meeting with members of the Amah Mutsun tribe. The Simpkins and Thoits families paid for the memorial, the press release states.

It was installed in November and will be dedicated during the time of the summer solstice.

“For us, that’s when the world, I guess in today’s terms, the vortex is open and allows us to pass through and communicate with our ancestors better,” Lopez said. “That’s why we have it then. It’s a chance for a new beginning, new life, new opportunity.”

The memorial is surrounded by seven trees to signify the importance of seven generations to Native Americans.

“The way we look at it is the way we love and hate—our optimism and pessimism, the way we deal with difficult issues and make decisions. Those qualities are given to us by the seven generations before us,” Lopez said. “Before us, there were conditions of slavery, violence, rape, incredible death, loss of our culture, loss of our spirituality, loss of environment, horrible times. During that period, how could they pass on love, hope, optimism and the belief that everything’s going to be OK? As a result of that, our people today suffer a lot from historic trauma, and that’s something our tribe deals with in a very direct and active way.”

The tribe holds bi-monthly wellness meetings to talk about history, culture, traditions and ancestors, as well as difficulties faced by the tribe. A tribal psychiatrist who has worked in historical trauma for 20 years, along with two therapists, are there to support tribe members, Lopez said.

It’s been tremendous,” he said. “Our people have done a remarkable job of recovery from historic trauma. We pray to our ancestors for all they suffered and had to go through. We give them thanks for allowing us to be here today surviving those periods. Then we talk about our responsibility to the next seven generations.”

When Mission San Juan Bautista was active, an elder said their people would suffer for seven generations and then things would get better, according to Lopez.

“I’m the seventh generation,” he said. “The timing was correct for us to start speaking out more in public and letting people know who we are.”

Lopez became chairman of the Amah Mutsun Tribal Band in 2003 after elders came and asked if he would run.

“In our culture, whenever elders ask, it’s more than just a question,” Lopez said. “They’re telling (you), you cannot say no to the elders.”

Lopez said the tribe stayed closed to itself when he was growing up.

“We didn’t share a lot with the outside world,” he said.

When he became chairman, elders told him that the public didn’t know who the tribe was and that others were trying to claim their identity.

“We need to claim our territory and let people know who we are. That’s what they asked me to do,” he said.

While Lopez speaks out and works to better the Amah Mutsun Tribal Band, he doesn’t consider himself an activist.

I’ve never thought of myself that way,” he said. “I’m a person who wants the truth to be told about our history. And we want to restore the environment. Those are the things that are of utmost importance to us.”