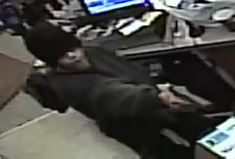 Police are asking the public for help identifying two young men who held up a Hollister convenience store at gunpoint last week in an incident where a clerk narrowly dodged a bullet.

About 1:20am Sept. 15, an unknown male entered the Quik Stop store at 10 San Felipe Road. The man pulled out a handgun, pointed it at the clerk and demanded money, according to police.

As the robbery continued, the clerk feared for his life and attempted to escape, police said. As the clerk struggled to escape, the robber fired a single shot. The bullet struck the cash register, and the clerk was able to escape without injury.

A second male suspect then entered the store, and both men stole various items, according to police.

The first suspect is described as a Hispanic male about 18 to 20 years old, short and thin, police said. He was wearing a black beanie and gray sweatshirt with black and white jogging pants. He was carrying a silver 9mm handgun.

The second suspect is also a Hispanic man about 18 to 20 years old, police said. He was thin, and taller than the other suspect. He was wearing a black hoodie and black pants, with a thin mustache and blue backpack.

Police released photos from video surveillance cameras inside the store in an effort to identify the suspects.

Anyone with information about this investigation can call Hollister Police Department at (831) 636-4330. Those wishing to remain anonymous can call WeTip at (800) 78-CRIME. Information provided to WeTip may qualify for a reward.