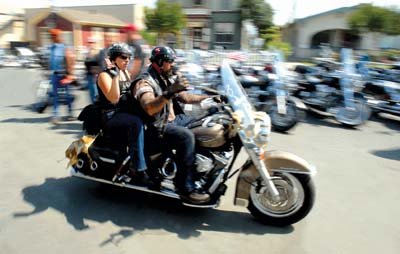 Hollister officials in recent months have talked about the annual motorcycle rally carrying a total cost of $180,000, but city records show a 2016 tab of just over $168,000, according to documents obtained by the Free Lance.
Additionally, historical records provided by the city show that officials over the past four years have calculated widely ranging figures for each rally’s total cost—a pivotal amount that plays heavily into promoter negotiations—with a fluctuation of $94,000 from year to year between rallies in 2013 and 2014.

A draft considered by officials this week showed changes made by promoter Roadshows Inc., referred to in the contract as “Independence Rally, LLC”. Those proposed alterations include extending the rally from three days to four. The promoter requested to pay $135,000 instead of $180,000, which is what the city has estimated it costs to put on the rally.

The Free Lance put in a records request for itemized costs, and the total on the document received by the newspaper for 2016 came to $168,184.

“If the number we’ve come up with is $180,000, that’s what it is,” said Councilman Ray Friend at Monday’s special meeting, before the records release. “If they don’t want to pay that, hit the road.”

“As far as we’re concerned, it’s not a pushback,” Burke said. “It’s the same they asked for last year, they’re asking for this year. And we’re offering the same amount this year as last year.”

“The four-day thing was another eye opener,” Klauer said. “You just get a bonus extra day for free? I don’t understand how that could have made it into their draft of the contract without at least knowing what they were trying to do.”

Burke said that the fourth event day was included only for 2017 because July 4 falls on the Tuesday after the rally.

“In 2018, the fourth is on a Wednesday,” Burke said. “In 2019, it’s on a Thursday. We’re fine with leaving it as a three-day event, but we thought the city might want to look at an additional day for additional revenue for everyone.”

Some of those itemized costs from the 2016 motorcycle rally include:

Documents show the Hollister Fire Department had an original budget of $15,000 for overtime. That means the department was $5,181.05 over budget for the 2016 rally. Meanwhile, the Hollister Police Department was under budget for the 2016 rally. The police department’s original budget was $28,500 for all pay, including overtime, but came in about $12,000 under.

According to the Monday meeting’s agenda packet, the downtown motorcycle event would be planned for June 30, July 1 and July 2. Hours of the rally would be 9 a.m. to 9 p.m., except Sunday from 9 a.m. to 5 p.m.
Local resident Marty Richman shared his thoughts on the promoter’s contract changes during public comment at Monday’s meeting.

“You know what I read these changes as?” Richman asked the council. “These changes are somebody saying, ‘No thank you.’”

Richman continued to speak about the contract negotiations.

In a phone interview with the Free Lance on Wednesday, Mayor Ignacio Velazquez shared his thoughts on the rally. Velazquez has been on-again, off-again with his voting status for the event because of questions about a potential conflict with his ownership of The Vault building downtown.

“I think it’s one of those things that bring a lot of visitors to our town; it has a positive economic impact,” Velazquez said. “I think there’s a lot more positives than there are negatives. It’s a world-famous event in our community. To keep trying to get rid of it makes zero sense to me. It brings 100,000-plus people to the community.”

The world-famous motorcycle rally has its historical roots in the 1947 invasion of Hollister by the Boozefighters, told in the film “The Wild One” starring Marlon Brando. The first official rally was held in 1997 to commemorate the 50th anniversary of the invasion. Roadshows Inc.’s involvement in the 2016 rally marks the third promoter in four years. It was the only promoter to submit a bid for the 2016 rally after the 2015 promoter, Las Vegas-based ConvExx, left over a dispute of $90,000 owed to the City of Hollister. North Carolina-based Worldwide Dynamics promoted the prior two rallies.

Velazquez played a key role in reviving the motorcycle rally in 2013 after rising costs caused the nonprofit running the event to opt out in years prior. The 2013 rally was the first one to be held since the event was cancelled in 2008.

The Reno-based Roadshows Inc. agreed to pay $135,000 to cover city costs relating to the 2016 rally. The promoter also agreed to collect city business license fees and sales tax revenue totalling an estimate of $45,000.

“We’re creeping up the cost again and saying it’s costing us money,” Velazquez said. “When we charge $20,000 to the Fire Department for overtime, why in the world are we paying that to the fire department? I don’t understand.”

Velazquez said he thinks the budget is “too high.”

Velazquez said the problem is that the numbers aren’t understood clearly.
“When that happens, we get ourselves in trouble like we have in the past,” Velazquez said. “We need to control our costs, not just for the rally but for the whole city. Otherwise we’ll be in financial trouble.”

Despite his feelings toward the budget, Velazquez said the rally is a net positive for the community.

“I’d love to see a local nonprofit do it, but until then we have to have a promoter,” he said. “We shouldn’t be accusing them of making money.”