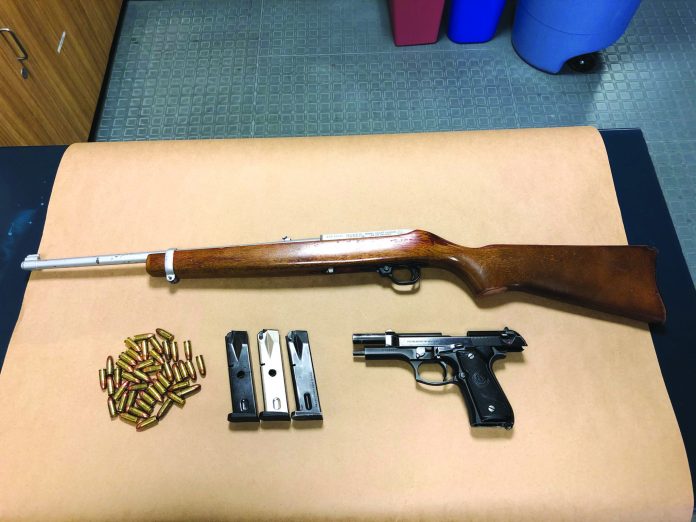 Following an investigation, police arrested a San Benito High School student accused of selling narcotics to local juveniles, some of whom were hospitalized after ingesting the drugs.

Esqueda learned someone in the community was selling Xanax, a prescription narcotic, via the social media platform SnapChat, police said.

Over the next 24 hours, Esqueda learned that four juveniles had been transported to the hospital for medical treatment related to the ingestion of suspected Xanax pills, according to police. The juveniles were released after treatment.

Investigators then learned that the suspect who allegedly provided the drugs to the juveniles lived on the 800 block of Central Avenue in Hollister, police said. On Jan. 31, Hollister police officers, along with agents from the Unified Narcotics Enforcement Team, executed a search warrant at the Central Avenue residence.

During the search, officers found a 9mm semiautomatic handgun and a .22 caliber rifle, authorities said.

The juvenile suspect was arrested and booked at San Benito County Juvenile Hall on suspicion of providing a controlled substance to a minor, according to police. Another resident of the home claimed ownership of the firearms, but the weapons were seized while police continue to investigate.

“I want to thank Hollister Police Department for their proactive collaboration and follow-through, ensuring that our students’ well-being is always at the forefront,” SBHS District Superintendent Shawn Tennenbaum said. “Hollister PD and our contracted SRO are partners that work with us to support the health and safety of our students and the greater community.”

In a press release Hollister police advised the community that “the misuse of prescription narcotics is a national epidemic.” Police have seen an ongoing increase in the presence of counterfeit prescription pills on the streets; these pills often contain the opioid Fentanyl, a highly potent pain medication that has resulted in fatal overdoses throughout the nation.

Residents are warned not to take any medication that was not provided by a doctor or pharmacist, reads the press release.

Anyone with information about this case can call HPD Officer Staci Esqueda at (831) 636-4330. Those wishing to remain anonymous can call the WeTip hotline at (800) 78-CRIME. Information provided to WeTip may qualify for a reward.