San Benito High senior Savannah Sepulveda was a newcomer to the sport of wrestling two years ago when she faced Monterey High’s Lima Sadozai. Safe to say, things did not go well for Sepulveda, who is currently ranked No. 1 in the Central Coast Section in the 235-pound weight class.

“She kind of suffocated me and I couldn’t breathe,” Sepulveda said. “It was traumatizing. I’m not kidding when I say I would cry before and after matches having to wrestle her.”

All told, Sepulveda lost to Sadozai three times in her sophomore season, and let’s just say each match was a rather unpleasant experience.

“The second time I faced her, I was already scared, let it get to my head and I lost within 20 seconds,” she said. “The third match it was the same thing, where she suffocated me. The coach saw I couldn’t breathe, so the ref stopped the match. I got caught in a bad position and paid for it.”

A traumatic experience like the one Sepulveda faced could’ve drove her out of the sport. Instead, it motivated her to take her game to another level. And that’s exactly what Sepulveda has done. After losing to Sadozai three times in the 2017-2018 season, Sepulveda has completely turned the tables on their rivalry, beating the Monterey High senior twice this season, both via pinfall.

“Beating her this year was just huge for me,” Sepulveda said. “She has been one of my main roadblocks in my way, and to be able to overcome that this season has skyrocketed my confidence. My sophomore year, I was actually scared of her. After I beat her for the first time, I’m pretty sure she was furious. (After beating Sadozai) at Santa Cruz (Coast Classic), I thought we were friends (or at least friendly competitors), so I went over to give her a hug, and she didn’t want a hug. She kind of stormed off the mat, punched a wall and kind of sat there pretty mad.”

Sepulveda, who went 2-2 in reaching the quarterfinals of the Central Coast Section Championships last year, enters this year’s tournament as one of the contenders to win the 235-pound title. She has put together an impressive resume, with tournament championship victories in the La Manzanita Classic at Watsonville High and the Hollister Lady Baler Bash to go along with runner-up finishes in three other tournaments.

“I think my main focus this year is to make it to state,” said Sepulveda, who placed second in the Pacific Coast League Championships last Saturday at Alisal High. “I would have to place in the top four (at CCS). Before this year, I never really thought I could be a CCS champion, but that could be a goal of mine. I’ve put in a lot of hard work and hours, and it would be great to see all my hard work and dedication pay off.”

San Benito High coach Samantha Barrientos has been particularly proud of how much Sepulveda has improved this season, pointing to a stronger mental focus and desire to continually get better.

“I truly believe it’s just a mindset,” Barrientos said. “She is known for always staying after practice to get a few more workouts in this year, and I just believe in all the work she’s been putting in has really translated to her matches. The mindset of her believing in her skills and having all the support of her family, team and coaches is showing, because now at times she is unstoppable.”

After every match, Sepulveda spends copious amounts of time analyzing her matches, courtesy of video taken by her mom.

“When I watch myself on video, I see I’m able to counter attack well,” she said. “I think I’ve gotten a lot more skilled and now I can measure myself (against girls I’ve lost to before) and see how much I’ve improved each time. I just want to do better and better. I think I’ve definitely improved my throws because coach has showed me to really use my hips so I can throw a lot better. I’ve also gained a lot of experience over the last couple of years, and I’m able to counter moves, which has really helped build my confidence.”

Sepulveda trains with the Hollister Razorbacks club team in the off-season, which accelerated her development and set forth in motion the success she has had this season. However, Sepulveda enjoyed another aspect of being with the Razorbacks helping out as an assistant coach to the 6- to 13-year-old age group.

“It really is cool watching the younger kids,” she said. “One of the girls—her name is Sam—I coached her from the first day (of club practice), and she came in and was a firecracker. Watching her grow and watching her win a few matches was pretty cool.”

“She lost a tough match there, but was able to bounce back and place fifth, which is a huge accomplishment,” Barrientos said. “At the Baler Bash, she won the match in the finals, and that was to secure the No. 1 ranking in CCS. There was a lot of emotion and a lot of energy in the room for her to pull it off, which was phenomenal.”

Sepulveda was raised in San Jose, and attended Branham High in her freshman year. Her family moved to Hollister before the start of her sophomore year, and the transition to a school known for its sprawling campus and mega enrollment size didn’t faze Sepulveda.

“It was actually a pretty smooth transition because my cousins went to the high school, so I was able to hang out with them,” she said.

Sepulveda only took up wrestling to use it to improve her conditioning for water polo, which was her previous favorite sport and something she competed in up until her senior year.

“I knew they didn’t make cuts for wrestling, and I just needed conditioning,” said Sepulveda, who credited Barrientos and coaches Steven Salcedo, Tim Castillo and Isaias Rivera for honing her skills and mental mindset. “Coach Salcedo taught me all the basics, and coach Isaias and coach Tim have really worked with me and kind of narrowed my focus in certain areas. And with coach Sam, it’s really nice to have our own coach and own program. She has really brought a lot of attention to the wrestling team in general, and she’s always pushing us and motivating us.” 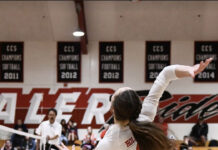 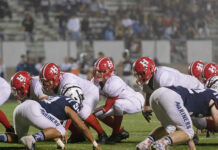 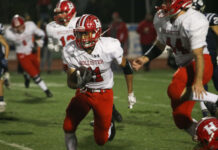