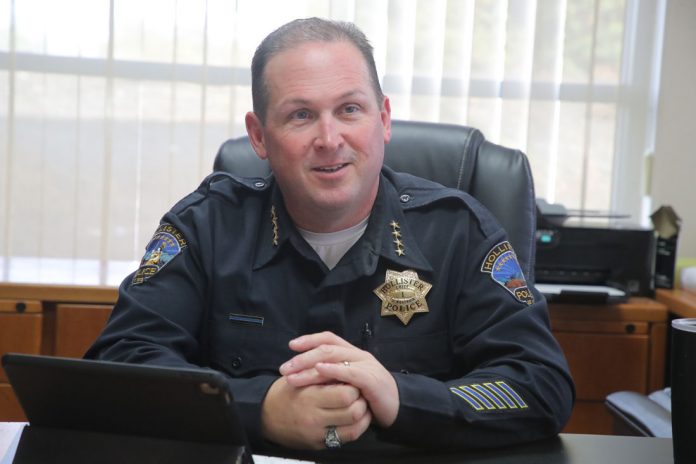 After retirement, youth and charity activities will be priorities

Hollister Police Chief David Westrick anticipates certain aspects of his life won’t change much after he retires from a 30-year law enforcement career before the end of this month.

“I have a servant’s heart,” Westrick said during a recent interview in his office at the city police headquarters on Apollo Way. “So I would imagine that I will stay involved in every fundraiser, every (non-government organization), every sort of need in the community and the region at large.”

That includes his likely ongoing role as a “big supporter” of the Special Olympics, involvement in rodeo activities and encouraging good health by competing in and inspiring others to enter Spartan Races.

Mayor Ignacio Velazquez said one of the biggest successes of the police department under Westrick’s watch has been a drastic reduction in crime. The chief estimates that crime has dropped 30 percent in the last six years. Velazquez also credits Westrick with “building a community that respects each other and works with the police department, rather than fears them.”

The timing of Westrick’s decision to retire isn’t based solely on the length of his career and his eligibility for retirement benefits. Westrick’s 17-year-old daughter—he and wife Liz’s younger of two children—is graduating from high school in 2020, and he wants to focus on successfully sending her off to college.

“You don’t start this line of work with this day in mind at all,” says Westrick. “It kind of creeps up on you a little bit. So for me, it was a decision that culminated with some of my personal life goals, and then really career goals as well.”

Westrick speaks proudly of his law enforcement career. But he reserves his highest praise for the community of Hollister, where he and his wife plan to stay after the chief retires. He calls it an “honor” to serve the local community.

“Here, it’s been really nice because it’s almost like an island of staunch support for public safety,” Westrick said, “and that’s something I always count my blessings on.”

Westrick, seeking a change of pace from his daily commute to Redwood City, joined the Hollister Police Department in 2003. He worked his way up the ranks until he was appointed chief of police in 2013. Also during that time, he earned his bachelor’s degree from Union University. And he graduated from the prestigious FBI National Academy for Executive Development in 2018.

Westrick’s career in Hollister has been “fulfilling,” he says. Crime has dropped, and the police department and its personnel have become a mainstay presence in the social media feeds of local residents seeking answers and solutions to public safety issues in their neighborhoods.

“I think I was one of the first police chiefs online on social media, probably in the nation,” says the Hollister chief. That engagement and outreach effort spawned Hollister’s first Neighborhood Watch and Park Watch programs. Westrick is now tagged on social media posts dozens of times each week, and often responds publicly to such requests for his input or assistance.

“I believe in community policing, the concept where we can help the (residents) of Hollister make their neighborhoods safer by interacting with them (and) listening to them,” says Westrick.

Westrick is also proud of the fact that the police department never went over its yearly budget under his watch.

In fact, his first piece of advice to future police chiefs and city leaders is to never go over budget in any department, and “always be prepared for a rainy day.”

He is also pleased with the expansion and success of the city’s school resource officer program, a partnership with the local school districts aimed at campus safety.

Demonstrating one of the leadership traits that likely led to Westrick’s repeated promotions over the years, he is quick to give credit for these successes to his officers.

“They are doing a really good job,” says Westrick, “and I’m very proud of them for that.”

That includes his detectives’ work on one of the most high-profile cases of his career: the 2014 murder of 19-year-old Ariana Zendejas and the arrest of her alleged killer, Jose Antonio Barajas.

Westrick said during the four-year manhunt for the suspect, he kept a photograph of Zendejas on his desk. He admitted the investigation and ongoing contact with Zendejas’ family took an emotional toll on him until they arrested Barajas.

Hollister’s acting city manager, Brett Miller, has not yet named an immediate successor to Westrick, but local native and longtime police veteran Capt. Carlos Reynoso is the presumptive choice.

One challenge the next chief will face is how to respond to a recent study, commissioned by Westrick, that recommended a nearly 80 percent increase in the department’s sworn staff. That translates to 11 new officer positions, at a cost of about $1.8 million, according to the study by Novak Consulting Group. The growth in staff is recommended due to Hollister’s projected population growth, even if crime is on a downward trend.

Westrick agrees with the recommendations, but adds that it would be “impossible” to add all 11 officers at once due to the significant cost and time constraints related to training. The next chief should propose a more “palatable” schedule that would add new staff positions in phases, perhaps up to “three or four new people a year,” Westrick offered.

Westrick was pleased with the study’s findings on existing officers’ effectiveness and ability to reduce crime despite the department’s low staffing compared to similar sized cities.

But Westrick, for now, plans to watch that growth from the sidelines, though it wouldn’t be a surprise to see him offering support for future public safety and community leaders.

“But what I do afterward, after I retire, I think is going to be just as fulfilling and important,” says the chief, “because I kind of set a real high bar for myself, personally, about staying involved and just being an example.”