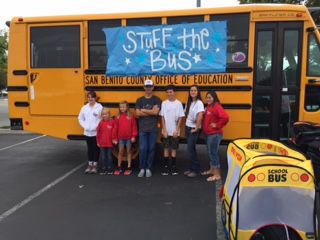 About 2,000 students have a backpack and school supplies thanks to dozens of local volunteers who took part in this year’s Stuff the Bus fundraiser.

The United Way-led effort culminated last Saturday with a backpack giveaway in the parking lot of Hollister’s Target store.

“What we do is, we’ve been fundraising for the past six weeks with getting sponsors for the backpacks,” said Vicki Fortino, an organizer with United Way. “So all of that money was used to buy the backpacks and the school supplies in bulk.”

On Saturday at 9 a.m., volunteers showed up to pack the supplies and backpacks. School district representatives were there to help along with many others from local groups like Rotary and local businesses like Pacific Scientific.

The need stems from there being more than 7,000 children in this county qualifying for financial assistance, according to a United Way press release on the event.

“We probably had 100 volunteers from all the different groups,” Fortino said.

“A lot of their kids have to leave the county because there are not enough foster homes,” Fortino said.

Kids receiving backpacks had a stomach-filling surprise at Saturday’s event, too.

“It was really awesome of Rotary to come down and barbecue hot dogs,” Fortino said, adding how the nonprofit made hundreds of them.

The event chairperson, Diane Barr, reflected by email on the younger generations of volunteers who gave their time for the effort.

“I was especially moved by the youth groups, such as 4-H, Girl Scouts, and the San Benito High’s Cross Country team, giving up one of their last Saturday mornings of summer to pack backpacks so that other county youngsters will start school ready to learn,” she said.

What 3-foot social distance means for return to California schools

County Board of Ed. to appoint new member