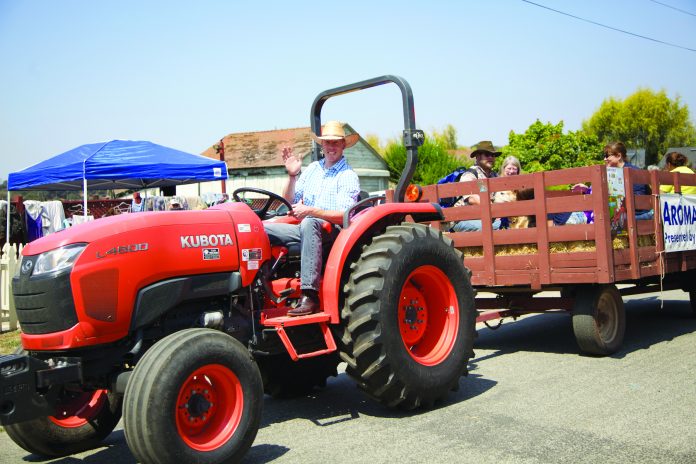 With one restaurant, one gas station and one-lane roads, Aromas reflects the last of a wilder West in the Bay Area. In August each year, the Aromas Eagles throw a celebration of the tiny town to raise money for local nonprofits.

This year’s Aromas Day drew between 5,000 to 7,000 attendees, doubling the resident population of about 2,600. Parking fees, a pancake breakfast and over 50 booths brought in thousands of dollars on Aug. 28.

Organizer Jan Saxton, who carted around the festival in a hat that read “I’m the Boss,” said the fundraising aspect makes the event essential to the town.

“It’s all community support,” she said.

Aromas Day began in true grassroots spirit. Neighbors started holding end-of-summer garage sales during the last weekend of August. Pretty soon, most of the town was hauling out unwanted goods to their front lawns.

The festival attracted much attention from surrounding areas and grew. Aromas is divided in half between Monterey and San Benito counties, and residents of both areas flocked to the town.

One year, the tendency for packed crowds ended disastrously as an emergency response vehicle was unable to push through the dozens of haphazardly parked cars. After a brief hiatus, the festival returned, and the new organizers made changes.

“We have insurance now,” Saxton said. “And parking.”

Roadblocks prevent people from parking in the town itself. Instead, visitors stop at two enormous lots on the outskirts of Aromas.

The parking lot is consistently the biggest money maker of the festival, according to Saxton, and both lots were packed this year. Through $5 donations, the lots raised well over $4,000 toward a space camp fund for students at Aromas School.

Other school and youth groups sold deep-fried carnival foods and desserts to raise funds. The Aromas Grange played host to an early morning pancake breakfast, followed by a silent auction.

Although only the town’s nonprofit groups could set up food stalls, the festival did attract vendors from around the state. Among them was a bright yellow banner advertising a Hermit Crab Throw, and a corresponding booth where kids were throwing small, round objects into glass jars.

The booth’s owner, Jeff Wojcik, realizes there could be confusion.

“That sign got messed up,” Wojcik said. “But it’s just like winning a goldfish, but you take home a hermit crab.”

The day ended with a parade along the town’s main road, where residents usually prefer to ride around in ATVs and golf carts as opposed to cars.

“It was a great day—very friendly, relaxed atmosphere. The weather was beautiful,” Saxton said. “It was just a wonderful day.”