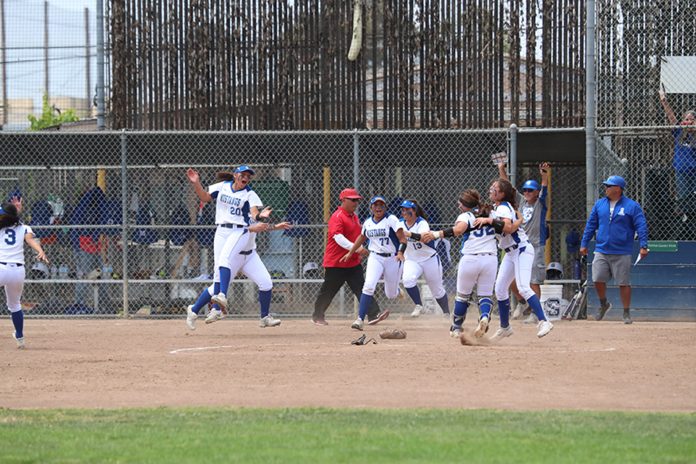 In a game that was every bit as good as advertised, the Gilroy High softball team edged San Benito 4-3 in the Central Coast Section Division I playoff championship Saturday at San Jose’s PAL Stadium. In beating the No. 15 seed Haybalers (17-14), the top-seed Mustangs (19-9-1) won their first section title since 2013.

“We’re feeling great; we’re on top of the world,” Mustangs coach Bria DeLorenzo said. “We knew this game was going to have a lot of emotion and intensity. Not only is it a championship game,

but we’re playing against our rivals. Earlier in the season, we had only beat them one time in the past 12 years. But the girls came ready to play, they were prepared, and they had great intensity from the get-go.”

It was nowhere near comfortable, though. In a game full of defensive gems, a few costly errors, some timely hitting, and a bit of controversy, the season’s finale was a nail-biter. In the bottom of the sixth inning, with the score knotted at 3-3, freshman designated hitter Kaitlyn Martinez drove in freshman right fielder Lauryn Yslava—who led the inning off with a double—for the game’s decisive run.

Mustangs ace Gianna Vanni went the distance for the victory, and in making a nice impression of Angels’ rookie sensation Shohei Ohtani, she also helped to hit her team to victory when she smacked a two-run triple in the bottom of the second inning. Left fielder Hannah Hoeptner drove in the third run of the inning with a single for a 3-0 Gilroy lead.

“I’m speechless,” Vanni said. “Yesterday was our last practice, and I had a feeling that we were going to win this game. I didn’t want to verbalize it and jinx it, but we came out strong, loud and proud. I’m so thrilled and so happy that I was able to experience this.”

The Haybalers did all of their offensive damage in the top of the fourth inning. San Benito junior third baseman Dominique Monteon drove a stinger fly ball over the outstretched glove of Mustangs sophomore centerfielder Abby Clark to lead off the inning. Next up, junior catcher Amber Rodriguez sharply lined out to third baseman Vanessa Zozaya, who dove to second base for the forceout, completing the double play. With two outs and no runners on, Balers senior Madison Greco blistered a triple to right field. Noel Chavarria followed with a run-scoring single, cutting the Balers’ deficit to 3-1. The Balers kept the inning alive after two Gilroy errors, a passed ball and an attempted steal by Sephra Loza scored two more runs, evening the score at 3-3.

“We knew it was going to be a seven-inning game, we had plenty of time and we were going to take it inning by inning and bat by bat,” Balers coach Andrew Barragan said. “The way our girls fought back today was amazing today.”

Controversy ensued in the top of the sixth. With the game still tied at 3-3 and Greco on first base, Chavarria hit a pop fly down the right field line. Yslava, ranging to her right along the foul line to make a play, had the ball pop out of her glove and out of bounds. The initial call, which was ruled an error, was appealed by DeLorenzo.

Ultimately the umpire, saying that the runners had crossed paths on the bases, ruled Chavarria out and ordered Greco back to first base. A fielder’s choice concluded the San Benito threat to break the tie.

“The batter overran the base runner, which you cannot do,” DeLorenzo said. “I saw that right away, so when they called that it was a fair ball, I appealed. We were lucky that the home plate umpire was on it already. It definitely helped take momentum back in our dugout when we

Barragan was not happy with the call.

“Looking at my film, they did not cross paths,” Barragan said. “That was the discretion of the umpire, but I said absolutely not. The ball went out of play, and then, the players probably crossed, but I didn’t see it. The ball went out of bounds, so the ball was out of play, we should have been on second and third. But they said since the runners crossed, it nullified the play. It was wrong, but that’s what happened. We didn’t get a clear explanation of it.”

Aside from that, both squads turned in a fine day defensively. San Benito was not charged with any errors, and the Mustangs turned three crucial double plays and an outfield assist from Clark who threw out a go-ahead Balers runner at home in the top of the fifth to prevent the

“This is the best kind of softball out there, and I wouldn’t want it any other way,” said Mustangs junior Annabelle Gutierrez, who had two hits and was a lethal double play-turning combo defensively with Yslava. “I did not want a blowout; I wanted it to be a close game.”