In my last column, I touched on making new, healthy habits stick.
A quick review: Michelle Densmore, who is a certified personal trainer and licensed clinical social worker, wrote an online article in Runner’s World detailing the five things to ask yourself when developing a new goal.
1. Why do I want to achieve this goal?
2. Why now?
3. What will it mean for me if I achieve it?
4. What will it mean for me if I don’t?
5. What am I willing to sacrifice to achieve this goal?
In the article, Densmore wrote: “If you have honest and detailed answers to all five questions, your success rate (for your goal) will be high. If your answers are vague or missing, it’s a sign this goal isn’t good for you.” Her point? You need to have a deep grasp and understanding on the significance of a particular goal. In other words, make the goal personal and establish a deep connection to it.
Once you answer those questions, it’s time to go over some practical ways to implement into your daily routine to make your new habit last. Kara Mohr, who is an internationally-known educator in the area of weight loss, behavior change and exercise, listed four ways to set yourself up for success in an article she wrote for usnews.com.
1. Tie the new habit to something you do consistently
It’s hard to carve out time in the day for a new habit—whether it’s exercise, meal prep or anything else—when it feels like you’re always on the run in the first place. The key, Mohr wrote, is to “identify something in your daily routine that you can use to trigger the new habit … I’ve had clients pair waking up with exercise, taking fish oil supplements with brushing their teeth and drinking water with the commute to work.”
2. Create a routine that supports the new habit
If you want to start exercising on a regular basis, treat each workout as an important event. For example, the night before every workout, I lay out my clothes, gear and any other necessary equipment on my couch. By doing this, I’m already telling myself I’m prepared to work out in the morning, and there are no excuses.
It also reminds me to get to bed early—not only will it help with recovery, but an extra 30 to 45 minutes of sleep will put me in a fresh mental state upon wakening.
3. Create a reward for yourself
Mohr rewards herself with a cup of coffee after each meditation session. She wrote: “Ideally, find a way to reward yourself daily to reinforce the new behavior.” Of course, that doesn’t mean to down a three-scoop ice cream sundae from Baskin Robbins after a workout.
That would undermine all of the work you put in if you were attempting to establish a new exercise regimen. When I decided to lose weight in December 2001—I had reached an all-time high of 200 pounds—I made the mistake of using food as a reward for my newfound workout routine.
Years later, I started rewarding myself occasionally by unwinding in the evening by watching one of my favorite TV shows—and considering I don’t like to be sedentary at any point in the day, this was a suitable reward.
Today, I reward myself in other ways, including posting some of my workouts or race results on social media or every once in a while taking a selfie—gulp!—to reinforce just one aspect of the progress I’m making.
4. Keep trying. One fail does not mean a lost cause
It’s often said that old habits die hard. New habits, then, are difficult to start and even harder to sustain. Whatever you do, don’t give up. With the help of Densmore and Mohr, you’ve got the blueprint to make a new habit last for a lifetime. Sure, life will throw you curveballs along the way, but as Mohr wrote, “What matters is taking consistent action each day.” 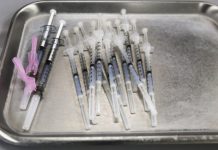