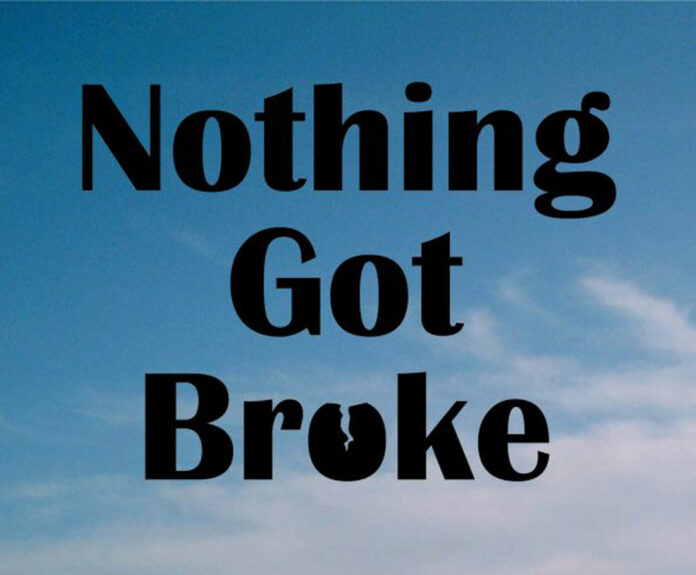 Longtime Hollister resident Larry Slonaker recently published his new novel, “Nothing Got Broke,” a murder mystery that is partly inspired by his upbringing and his previous career as a Bay Area newspaper journalist.

The book’s plotline follows a “cat and mouse” conflict between two characters—one a retired journalist and the other a young reporter—centering around the murder of a “low life criminal type” in San Jose, Slonaker explained in a recent interview with this newspaper. The story begins in the 1990s, and continues 10-15 years later in Montana, where the protagonist, Doug Rossiter, has moved to a “shack in the middle of nowhere” after leaving his newspaper career.

“‘Nothing Got Broke’ relates a battle of wits and wills between two people with wildly different aims, but with more in common than either wants to admit,” reads a portion of Slonaker’s promotional description of the book, which is classified as literary fiction.

Slonaker’s novel also offers a twist on the theme of redemption that is common in murder mysteries.

Slonaker has lived in north Hollister with his wife, Sandi, since 1993. For “Nothing Got Broke,” Slonaker drew largely from his real-life experiences as a reporter, columnist and editor for the San Jose Mercury News for about 20 years; and his upbringing in Montana, where he was born and raised.

“A sort of subplot to the whole thing is Native Americans and how they’ve been treated in Montana,” Slonaker said. “The protagonist is obsessed with the notion of righting that wrong.”

Slonaker moved to California in the early 1980s, and began working for the Mercury News in 1983. Throughout his career at the San Jose newspaper he covered general assignment news and education, among other beats. For a couple years during that time, he oversaw the Mercury News’ “Hollister bureau,” which consisted of only Slonaker and was tasked with covering local San Benito County news.

He wrote a weekly column about Hollister for the local Mercury News bureau, he said.

In 2001-02, Slonaker took a one-year leave from the Mercury News to try his hand at a teaching career. That year, he taught seventh grade at Brownell Academy (now Brownell Middle School) in Gilroy.

When he returned to the Mercury News after a year, he published a five-part series about his experiences as an educator.

“One thing I learned from the whole experience was, I was not cut out to be a teacher,” Slonaker said.

But the series was the “most rewarding” part of his career at the San Jose newspaper, as it provoked insightful responses from teachers throughout the Bay Area who thought Slonaker’s writing captured the difficulties of the profession.

“We heard from scores and scores of teachers who were so happy because they felt like the series raised some of the challenges they go through that people don’t normally understand—in terms of bringing kids along from the first of the year to where they’re supposed to be at the end of the year,” Slonaker said. “And things like dealing with problem students and problem parents, and helping students who really want to succeed.”

Slonaker continued writing for the Mercury News until 2005. He left the newspaper for a job on the internal communications staff of Stanford University—from which he retired just a couple years ago.

Now, the Slonakers live on a five-acre property in the Spring Grove area of Hollister, where they have three horses. In fact, the couple’s equestrian hobby is what drew them to their current home, Slonaker said. Two of their horses are cutting horses, and they have competed in area cutting events over the years.

“We love it here because it’s nice and quiet and peaceful,” he said. “In many ways, it’s hard to beat where we live.”

Slonaker began writing “Nothing Got Broke” during his time working at Stanford, particularly while commuting on Caltrain from Gilroy to Palo Alto. “I found myself with all this time on my hands” during the commute, Slonaker said. “That’s when I started churning out pages.”

He put the finishing touches on the novel within the last few years.

“Nothing Got Broke,” published by Cirque Press, is for sale on Amazon, and other online stores.

Slonaker said he will gladly visit local book clubs whose members are interested in reading and hearing more about the new novel. He is planning to travel to Montana later this year to promote the book.

To contact Larry Slonaker or to learn more about “Nothing Got Broke,” visit his website larryslonaker.com. Slonaker’s five-part newspaper series on his year as a seventh grade teacher at Brownell Academy is also found on his website.