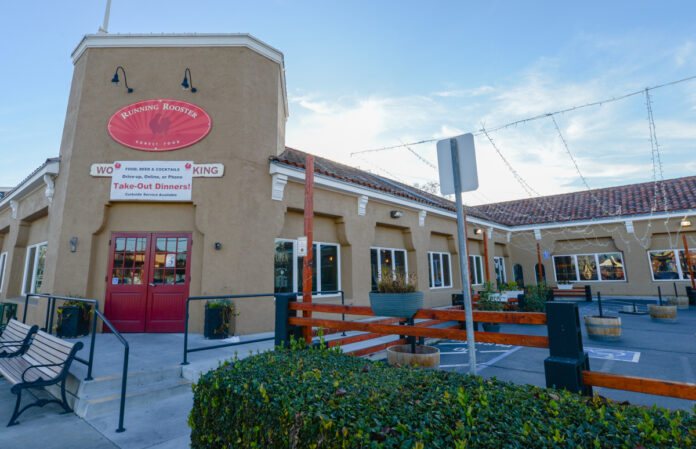 The Running Rooster restaurant has had to adapt and change several times over the years in an effort to provide the community an all-out dining experience.

But nothing could’ve prepared co-owner Jim Chapman for what happened to him and many of the other downtown Hollister businesses during the Covid-19 pandemic.

After months of coming up with innovative ways to stay open, he announced last week that the restaurant is going into hibernation, meaning no business operations until a hopeful return in the spring.

Chapman, who’s owned the Rooster running in Hollister since 2003, decided to stay open through Christmas but mostly for the sake of the staff, many of whom have been working with them for several years.

“It hurts to furlough people any time, especially right now when hospitality jobs are impossible to come by,” he said. “But more important is that we are able to continue to be a healthy business in the future.”

Mayor Ignacio Velazquez said any business that has to close its doors has a huge impact on the city, which is the reason they’re doing everything they can to help with take-out orders and anything else they can do.

Velazquez mentioned that San Benito County is placed in the San Joaquin Valley Region but they haven’t been showing good numbers to put up an argument to reopen the economy. He said the reality is these numbers are horrible and getting worse by the day.

Velazquez said that the restaurant industry is having a hard time and some of them have figured out it’s not worth staying open, hoping to reopen when things are much better. He’s encouraging the community to support their favorite local restaurants by ordering from them as much as they can, whenever possible, to help keep the businesses afloat.

“If you have a restaurant you enjoy, go out and support them, order out from them,” he said.

When the pandemic shutdowns started in March 2020, Chapman furloughed the staff for a few weeks. They reopened with limited take-out and delivery service as soon as personal protective equipment supplies started coming in along with the guidance from the state and county.

“We weren’t able to come close to breaking even, cashflow-wise,” he said.

He applied for the Paycheck Protection Program and the Small Business Administration Economic Injury Disaster Loans, which kept them operating for the meantime. Chapman said it was important to keep at least some of the employees working and keeping the brand in the public eye.

“A problem we have that smaller restaurants might not, is that we can’t open the restaurant without a certain level of staff,” he said. “We aren’t a one or two-person operation, so the staffing level can’t be lowered to match the restricted business level when it is that low.”

Chapman said they invested money into some heaters and propane, putting together an outdoor dining space when they were able to have guests outside as well as some limited seating inside.

However, the state guidelines became more restrictive again and the weather turned, including the smoke from the nearby fires.

PPP funds were used up and they were living off the SBA money. Chapman said they started thinking about the necessity to save enough cash in the bank so they could have a strong reopening after the pandemic receded.

But the county fell back into the “purple tier” of the state’s Blueprint to a Safer Economy system, restricting them again to takeout and delivery service only. At that point, it became simply a matter of when to pull the trigger.

Velazquez, who owns The Vault on San Benito Street, said the key to the pandemic is everybody working together to bring the number of cases down and get things back to “semi-normal” as possible.

In March, it’ll be a year since he had to shut down his place due to Covid-19 restrictions. He said it cost him several hundreds of thousands of dollars in business but he made the move to close the doors in order to keep his staff safe from the virus.

“I made the calculation that the best thing I could do is shut down everything I can and there’s water service, electric, trash,” he said. “Anything and everything, I had to shut it down and minimize the hit I’m taking on it.”

Looking toward the future

Velazquez believes the outdoor dining scene would’ve been the ideal solution. But he’s frustrated that the county went from having some of the lowest number of Covid-19 cases to some of the highest in the state.

“But we’ll come back, we got the setup ready and everything to go,” he said. “We’ll come back as a community but how many people do we lose in the meantime?”

Chapman noted that profit for any restaurant is pretty elusive even under the best of conditions, so the only smart business decision for them was to become more conservative with the funds they had left.

He believes the way they can fully come back is if they can sit at 50 percent capacity, but it’ll also depend on whether the PPP loan gets forgiven and whether they can get a second one from the new money that Congress recently authorized.

Chapman will keep evaluating the decision as conditions change, however, another issue he faces is that the pandemic is still getting worse despite the arrival of vaccines. He said being in a public space, even when taking precautions, puts him in an unavoidably risky situation.

Instead, he’d rather close the business than know that the restaurant caused a death in someone’s family.

But all is not lost while they remain closed as Chapman mentioned that they may take advantage of the down time. He plans to make a few fun changes to both the menu and the dining room and kitchen.

“Restaurants are rough on buildings and equipment, so we can take the time now to get a few things fixed,” he said. “And when the county is able to relax the restrictions, we’ll be ready, spic and span, to welcome our guests again.”

Chapman noted that city officials have been great to the extent that they are able. He believes the changes to San Benito Street will be good for the downtown businesses.

He also noted that the customers have been supportive by donating money to help the staff since the pandemic began in March 2020.

“I have every confidence that they will all come back to us when we do reopen,” he said. “And all of us, the staff, will be really happy to see them. Maybe even go back to shaking some hands and giving some hugs when that day comes.”

An inmate at the San Benito County jail committed...
Crime

A Hollister resident who teaches at a middle school...