San Benito Street was shut down for more than two weeks as it went through some major beautification upgrades to help revitalize downtown Hollister. Yet, there was some uncertainty whether or not a new parklet project would work out for local business owners.

Carlos Hernandez, who owns and operates Heavenly Bakery, seemed more than optimistic of the idea as he watched customers sitting outside for lunch shortly after a ribbon-cutting ceremony on Nov. 14 to celebrate the reopening of San Benito Street.

“We’re all happy they’re enjoying it already, as you see,” said Hernandez as he pointed out the occupied parklet that sits in front of the bakery.

Hernandez was joined by several other local business owners along with a group of elected officials and community members on Saturday morning as Mayor Ignacio Velazquez cut the ceremonial red ribbon.

When talks started circling around the parklet program, Velazquez thought it was going to be something as simple as a couple of tables and chairs along the sidewalk. The final product was almost surreal to him.

“It’s beyond what I ever imagined it would be,” he said.

Velazquez commended the local contractors and the Hollister public works crews for working until 10pm the night prior to the grand reopening. He mentioned that the parklets will change downtown forever.

“They were just attacking these things all over the place, going at it nonstop because they wanted to make sure their town was getting done as quickly as possible,” he said.

The Hollister City Council unanimously approved the parklet program on Oct. 19 for businesses to use for outdoor dining and retail, allowing the stores and restaurants to stay open in compliance with Covid-19 restrictions. They also transformed San Benito Street into a one-way traffic flow that now runs southbound from Fourth Street to South Street.

On Nov. 17, the state imposed more restrictions on local businesses due to the increasing spread of Covid-19. Gov. Gavin Newsom placed San Benito County into the “purple” or most restrictive tier of the state’s reopening framework, resulting in another closure of indoor dining, among other rollbacks of business activity.

But outdoor dining and shopping are still permitted, allowing downtown Hollister to take full advantage of the new parklets.

Hernandez, who’s owned the bakery for the past two years, believes the new parklets give them an opportunity to expand as a business. He also hopes it will attract more tourism to the downtown area.

Space is limited inside of the bakery and the new parklet gives Hernandez some extra tables. It also gives him a sense of security to stay open with the ongoing shifts in the state’s Blueprint for a Safer Economy.

“The Covid-19 numbers are getting a little bit higher so if they go back we at least have the opportunity to keep more staff because we have more seating, which means more guests,” he said. “That’s really good for us, it’s hope.”

It took two weeks for the city to strip the roads, repave them with fresh asphalt and build a set of parklets. But, the process was about 20 years in the making as State Assemblyman Robert Rivas said during the ceremony that he remembered the first time he heard plans to revitalize downtown was in 2003.

The future of downtown was to have outdoor dining where the community can hang out, which then leads to more retail shopping, according to Velazquez.

The city used $80,000 out of the Coronavirus Aid Relief and Economic Security (CARES) Act funds, while San Benito County allocated $150,000. The total cost of the program will not exceed $230,000, according to City Manager Brett Miller.

San Benito County Supervisor Peter Hernandez spoke during the Nov. 14 event, pointing out that they actively engaged with the local business community.

City Councilwoman Carol Lenoir, who is a retired city employee, knows how hard the departments work and she wasn’t surprised that they’d get the project done in a short time span.

“I know when they want to buckle down and they have deadlines they always beat them,” she said. “I’m very proud of them.”

Lenoir had been trying to implement something similar to the parklets alongside San Benito Street when the downtown strategy plan was introduced. She believes the new setup is great because the amount of speeding traffic will be significantly reduced.

“We’ll have more people and more senior citizens who will be comfortable to come downtown. Just slowing it down,” she said. “Now we have more places to sit and when the summer comes, even the [Hollister Independence] Rally, it’s going to be priceless.” 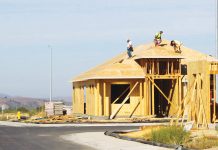 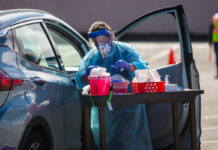