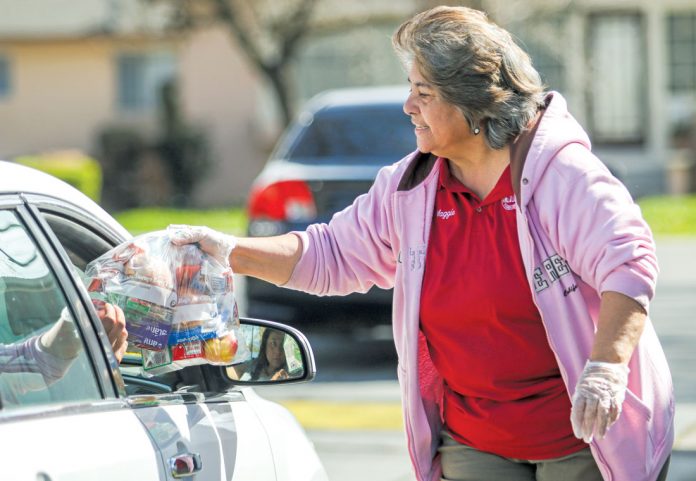 The San Benito High School District closed down its school site as the number of COVID-19 cases continues to rise in the tri county area. But that’s not stopping the District Nutrition Services program from feeding the local youth population.

The cafeteria reported they provided 740 meals to students Thursday and ramped up more the following day.

“It’s awesome,” said Food Services Director Jim Lewis. “It lets you know and lets us know how important we are and how much we are giving to the kids.”

The District Nutrition Services program continued to provide meals at no charge for all students during the school closure.

That also includes all youth 18 years old or younger.

They used a drive-through system that provided a lunch for that day and a breakfast for the following day.

Lewis said they are carrying over the standard school day where kids would probably get their only meal for the day.

“That’s a really big thing here because their physical well being, mental well being, a lot of it ties into whether they eat or they don’t eat,” Lewis said.

Lewis said it also gives parents one less thing to stress about.

The cafeteria staff made a little more than 100 meals on Monday and Lewis said he believed they weren’t going to get that kind of response. The following day they handed out 215 meals.

On Wednesday, they more than doubled the amount with 544 meals including 35 meals delivered to the homes of students in the Special Education program.

Shawn Tennenbaum, superintendent at SBHS District, said in an email that he’s proud and appreciative of the collective team effort from food service employees and Lewis.

“Not only have they done an outstanding job of connecting with families to provide nutritious meal options during these uncertain times, but their teamwork has been such a symbol of the collective, positive spirit of the district,” he said.

Tennenbaum mentioned the food service team’s service was not just evident last week but it’s a continuation of the 157,000 meals provided during breakfast, breaks, lunch and a free supper program in the fall semester.

“As a district, student nutrition is one of the foundational concepts to provide all students so they have the best educational experience possible,” Tennenbaum said. “It’s so comforting to know that we have people who care about providing that to them.”

Lewis said they follow the National School Lunch Program with certain mandates for both breakfast and lunch.

Breakfast needs to have a grain, fruit and milk, while lunch requires fruit, vegetables, protein and a grain.

It provides nutritionally balanced, low-cost or free lunches to children each school day.

The program was established under the National School Lunch Act, signed by President Harry Truman in 1946.

At SBHS, the meals may include foods such as a bagel and cream cheese with juice and a deli sandwich, carrots and ranch, chips and fresh fruit for lunch.

“Just to make sure everything is balanced,” Lewis said.

Lewis said they want to remind parents to keep children healthy by having them drink plenty of water and make wise food choices.

Students who need to pick up meals in person may do so, but meals may not be consumed on campus.

SBHS District encourages families to continue to be proactive in reducing the risk of COVID-19 by not allowing anyone to congregate at the school site once meals have been distributed.

They indicated there’s a possibility the school will reopen following Spring Break on April 13.

However, Governor Gavin Newsom said during an address on March 17 that school closures throughout California may extend through a later date.

Lewis said knowledge is hugely important as well as the educators who guide the students, but he believes feeding students is also a huge benefactor in their education and well-being.

Lewis said he hopes to distribute more meals this week.

“Kids can’t go on without food,” he said. “That’s the gap we’re trying to bridge.”

Toss them in olive oil and season with salt, pepper, garlic powder and a little Italian seasoning.

Roast for about 30 minutes at 375 degrees until your carrots are tender. Enjoy right out of the pan or mixed into rice or pasta, or as a stir fry vegetable.