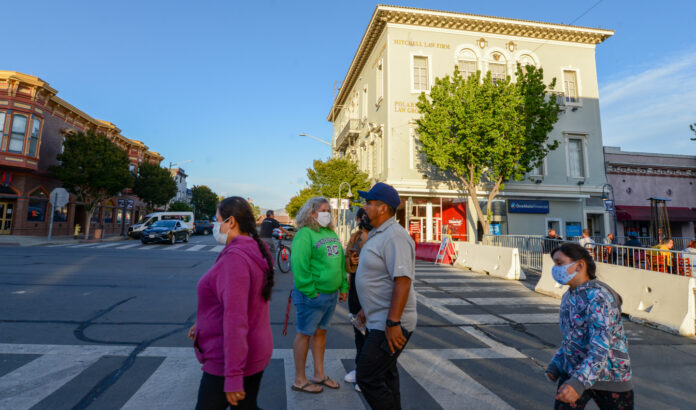 The choice of not wearing a mask in public could soon result in a hefty fine.

The San Benito County Board of Supervisors on Aug. 4 discussed the idea of having a new ordinance that requires people to wear masks or facial coverings in the unincorporated area of the county during the Covid-19 pandemic. Those not wearing a mask may be subject to a civil fine that doesn’t involve a criminal violation.

Unincorporated areas exclude San Juan Bautista and Hollister but both cities are free to adopt their own ordinances for similar purposes. Board supervisors will attempt to meet with the mayors of each city before meeting again Aug. 18 to decide whether to adopt a mandatory mask ordinance.

According to the county, “The idea is to have an appropriate lower level of enforcement that would still provide a means to encourage compliance with the mask ordinance because there would be a possible enforcement as opposed to a criminal action, which would have much more serious consequences for a person’s record and so forth.”

County officials said the purpose of this ordinance is to provide a noncriminal means of enforcement without requiring the involvement of police officers, the district attorney or the courts.

Those who want to contest a violation can appear before an administrative hearing officer and make their case as they would before a judge.

Supervisor Peter Hernandez said he’s against enforcement but he still wants to hear input to make sure there’s a balanced interpretation of the ordinance.

Several people phoned in for the supervisors’ meeting with concerns such as not being able to afford to pay for a fine and that it could divide the community. Others mentioned that it would be counterproductive and that there continues to be instances of assaults for not wearing a mask.

Supervisor Jaime De La Cruz said that the county and city are on a separate page when it comes to providing information to the public. He said he’s also against the ordinance, hoping that both parties could work together before coming to decision Aug. 18.

“That’s the only way to get things done, being partners,” he said. “Otherwise the information would be spread differently and people would interpret it differently.”

Hernandez said he would love to connect with San Juan Bautista and Hollister officials to work on a public conversation and try to come up with solutions.

“Not just tell people what not to do,” he said. “How about we do things that are actually going to help them like we actually build parks, we get some roads done. We work on things outside of the element of just mitigating this virus.”

Hernandez said it seems like they’re always on the defense and he doesn’t see how anyone can survive by playing that role.

“At the end of the day I got elected to do what’s right, not to satisfy my personal ego,” he said. “I’m all about solutions.”

Spread may be slowing

“It’s also a reaffirmation that the social distancing, the facial coverings, closure of bars and other high risk industries do make a difference,” he said.

Ghilarducci said San Benito County continues to show a reduced rate of Covid-19 spread compared to the numbers just three weeks ago. He said some of the stats that are coming in from the California Reportable Disease Information Exchange (CalREDIE) are delayed due to issues with computer software.

The delay means there could be a variation in some local numbers but he’s optimistic the county is heading in the right direction.

“Overall there’s some good evidence that we’re starting to get this back under control,” he said.

Ghilarducci said there continues to be a nationwide shortage of Covid-19 test kits and commercial labs are reporting a five-day turnaround, which is a slight improvement compared to waiting 14 days for results.

Tracy Belton, deputy director at San Benito County Health and Human Service Agency, gave a brief update before discussing the face covering order. She added a stat on the county’s online Covid-19 dashboard that includes how many ICU beds are being used and how many people are hospitalized in the county.

Belton said there’s been requests to provide information on people who are on ventilators but the hospital doesn’t report that data to the health department regularly.

“It would be unfair for us to report it out because we don’t have daily, accurate information on that,” she said.

Belton provided an update on the San Benito County OptumServe data that showed they continue to test on average 100 people per day. She said most of their pending results are cleared.

“There continues to be some bumps in the road with OptumServe but we continue to work with them regularly to make things work smoother,” she said.

Belton talked about the reopening plan for San Benito County schools and mentioned there’s a waiver process in place. She said the California Department of Public Health recommends that schools within the jurisdictions can’t be over 200 cases per 100,000, and the county is currently in the clear.

She said some schools in the rural area are in the process of submitting a waiver, which will be discussed and reviewed by Ghilarducci before bringing it forth to the state.

“We are working with some of the rural schools to have some reopening in smaller settings,” she said.