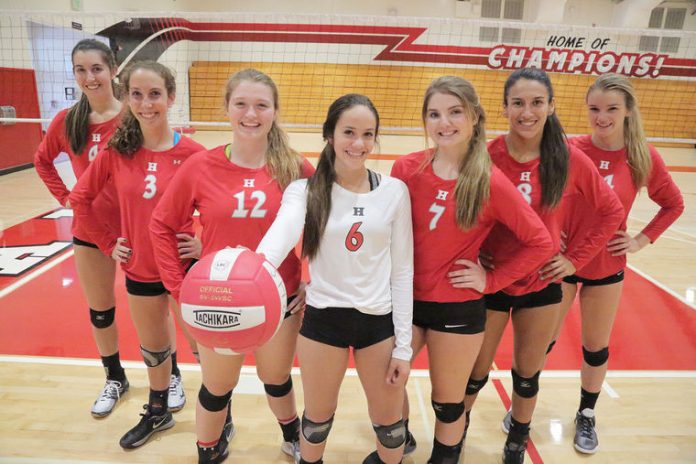 Volleyball: San Benito a team on a mission

The San Benito High girls volleyball team had one of its best seasons in program history a year ago, as it went 31-7 and won a Monterey Bay League Gabilan Division championship. However, the Haybalers simply weren’t good enough in a three-set blowout loss to Menlo-Atherton in a Central Coast Section Division I playoff semifinal.

This season San Benito believes it’ll be better equipped to win should it get to that stage again. Balers coach Ruth Testman repeatedly said she was excited for this year’s group, which lost only one starter to graduation. When asked if she thought this year’s team could be better than the 2015 version, Testman simply replied, “Yes.” The response spoke volumes.

“We’ll have more tricks up our sleeves,” she said. “We’ll have multiple offenses with a more dynamic game. We’ll be able to switch styles of play, which will keep everyone (opposing teams) on their toes.”

The Balers return senior outside hitter Marisa Villegas, who might be better than ever. Testman said Villegas has been efficient with deep corner shots, which should prove useful considering opponents weren’t shading their defenses in that area of the court on the majority of Villegas’ attack attempts last season.

“Mo is an amazing server and a 10 in every (skill) category,” Testman said. “She’ll be able to get us points at key moments.”

Lauren Sabbatini, a junior outside hitter, was unstoppable at times last season as she bludgeoned the ball with tremendous efficiency. Nicknamed Popeye, Sabbatini played a lot of beach volleyball in the summer, which has only enhanced her overall volleyball skills.

“In addition to her super hard swing, Lauren has developed more off-speed shots,” Testman said. “She wants to become an all-around player, and she’s well on her way.”

The Balers will utilize Sabbatini and Villegas from the back row, adding another dimension to their offense. Camille Finley, a senior middle blocker, is another top returnee who improved in the off-season. When San Benito used Finley on the slide, opponents often didn’t have an answer.

“She might be one of our top kill leaders this year,” Testman said. “She’s really good at reading the block, hitting around it and knowing when to tip the ball. She’ll be a force to be reckoned with.”

Annie Breger, a junior middle blocker, returns after missing around half of the 2015 season due to injury. Upbeat and vibrant, Testman knows she can count on Breger to keep the team’s spirits up at critical moments in the match.

“After Annie tore her meniscus, she still came to practice and kept shagging balls,” Testman said. “She is the most charismatic person and always jumping up and throwing her arms in the air. She loves the game so much, and it shows in her play.”

Nicole Andrade, a junior libero, gives San Benito stability in the back row. Andrade is like a coach on the court, keeping the team cohesive on defense.

“Nikki is always strategizing,” Testman said. “She sees things from a different angle sometimes, and she really understands the game. In my opinion, she’s the best libero in the league.”

Indeed, Andrade routinely came up with digs on balls that seemingly were going to drop for a point, leaving opponents flabbergasted. Andrade, Breger and Finley have three of the most potent serves on the team, and the Balers are looking for additional points from their serves this season.

Kieley Hoskins, a junior setter, was simply sensational a year ago. Able to read defenses and make decisions on the fly—two requirements for any top-notch setter—Hoskins attended the Stanford camp in the summer and came away from the experience a better player.

“Kieley is a phenomenal setter—just a great quarterback out there running all of our offenses,” Testman said.

Testman also expects a solid contribution from junior right side Emily Schneider, who like Andrade has a knack for keeping points alive.

“You think the ball is going down and Emily is there to get it,” Testman said. “Emily has shown she can swing it, and she is quick to pick up the tip which makes her a really valuable part of our defense.”

Testman is high on sophomore middle blocker Liz Fleming, who at 6-foot-1 means she is the tallest player the Balers have had in at least four years. Raw but talented, Testman marveled at the improvement Fleming has shown in just the last two to three weeks.

“In the beginning (of summer workouts), Liz could hardly hit to save her life,” Testman said. “But she’s been practicing her footwork and arm swing, and now she’s becoming a really powerful hitter. All the credit goes to her. She’s got long legs, big arms and she can block the ball. She’s going to be really good by the end of the season. I’m excited to have her on this team. She’s going to make some blocks on other teams and make some people feel really bad.”

Along with Breger, freshman defensive specialist Franchesca Giannotta is one of the most vocal players on the team.

Alyssa Ito is another newcomer who is expected to make an impact. The sophomore defensive specialist should further strengthen the team’s ability to keep points alive off hard-hitting attacks. Despite a terrific 2015 season, the Balers are motivated to take things one step farther this season.

“Every practice we’re talking about Menlo-Atherton,” Testman said. “We’ve got plenty of drive and fire to take things to another level.

It’s not often when teammates on a high school...
Local News

Describing it as one of the best experiences he’s...