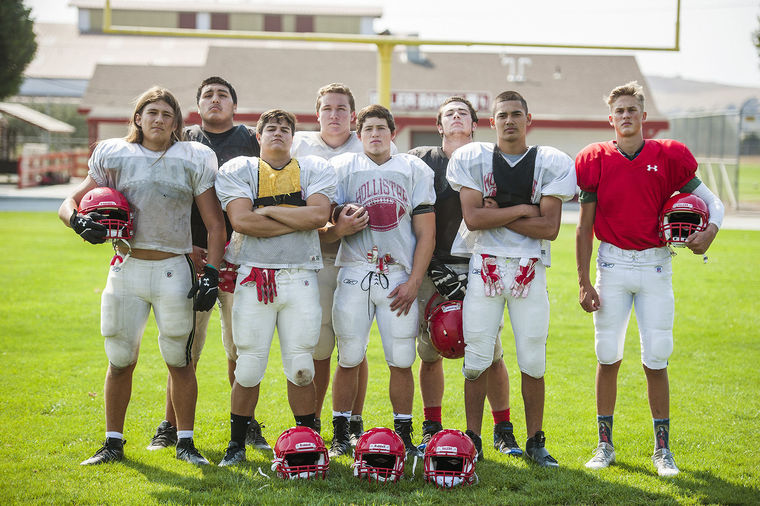 A new era has begun at San Benito High with the ascension of coach Bryan Smith, who took over in the off-season after Chris Cameron stepped down after 22 years. Even though Smith will bring his own coaching style to the Haybalers, don’t expect them to turn away from their roots.

Expect San Benito—which opens the season at Sacred Heart Prep of Atherton on Saturday at 2 p.m.—to be just as physical and tough as it has been for the last two decades. The team’s identity includes a steady dose of a punishing running game combined with depth and toughness on the lines and in the backfield.

Translation: The Balers should be just as solid as ever. They’ll have to be to survive a brutal non-league schedule that features Sacred Heart Prep and Santa Clara De Anza Division heavyweights Palo Alto, Los Gatos and Wilcox. Sacred Heart Prep, however, is probably the best program out of that vaunted group, as it has advanced to three state bowl games in addition to winning the coveted CCS Open Division championship in 2014.

“They do look good,” Smith said. “We’ll have our hands full—there is no doubt about it.”

The teams exchanged plenty of game and scrimmage film in preparation for the opener. The Gators feature a stout offensive line and terrific running back in Isoa Moimoi.

“We look forward to the challenge because we know what the challenge presents,” he said. “Our guys have been gearing up for the season to start for a while. I think we’ll be ready.”

“Evan is a big kid who is nasty in the trenches,” Smith said.

Senior center Vincent Chavez was chosen as one of the team’s captains for a number of reasons, but mainly for his dedication and tireless work ethic. Smith said even when Chavez had some honors tests to take in the spring semester, he came in at 6 a.m. to get his workouts done.

“This kid took advantage of every single day,” Smith said.

At 5-8 and 200 pounds, Chavez is undersized at his position. However, like many San Benito linemen before him, Chavez utilizes his frame well, gaining superior leverage on the opposition. Other stalwarts on the line include right tackle Blaize Solis, left guard Daniel Pasillas, and left tackles Frank Chavez and Ulices Flores.

On the defensive line, things start with tackle Richard Justo, who carries the nickname of The Chief because of his size—he’s 6-3 and 310 pounds—and because of his ability to dominate any person—or two—that tries to block him.

“I really want to see him explode this season,” Smith said. “He’s a smart guy and knows what other teams are trying to do to him. He has the ability to control the action on every single play.”

Combine Justo with defensive end Michael Camacho, and Smith feels ultra confident opposing teams will be running in the opposite direction of wherever those two guys are lined up. Even then, Smith feels strongly about the play of the other defensive linemen, which includes David Cadena, Jesus De Leon, Andrew Dalton, Eugene McBride and Marcos Flores.

Unlike most high school teams, San Benito has the luxury of not having to play their linemen both ways. That means less wear and tear on the players, and a better chance of having the starters in for the duration of the season. Smith is particularly excited about the team’s depth on both lines.

“I don’t know if this is our biggest team, but we’ve got a number of more bigger bodies,” he said. “This will allow us to play the style of football we like to play.”

Last Saturday the Balers played Bellarmine and Monterey in a scrimmage. Even though scrimmages are not actual games, they’re basically simulated ones and coaches come away with a better understanding of their team’s strengths and weaknesses afterward.

One takeaway for Smith was the team’s second unit outplaying the second units from Bellarmine and Monterey. The Balers return senior Hunter Nye, who is one of the best fullbacks in the section. Rugged, durable and agile, Nye amassed 1,384 yards on 190 carries—a 7.3-yards per carry average—last season.

However, the Balers are rarely a one-man running show. Nye will certainly gain his yards, but expect Zack Alnas, Albert Lopez and Matt Ramon to get some carries as well. Through Monday’s practice Adam Mendoza was the team’s No. 1 receiver, but Isaac Regalado and Antwuan Lind are also potential impact receivers.

Smith is particularly pleased with the group of tight ends, including Dante Tomasini, Gio Giannotta and Matt Hernandez. Tomasini made a big impact a year ago, not only for his tremendous run-blocking skills but also his ability to get open and make plays in the passing game.

“Our tight ends are a special group,” Smith said.

Speaking of special, senior Hunter Raquet has a chance to be a special quarterback. The 6-2, 180-pound Raquet throws a nice deep ball and showed flashes of brilliance in 2015 when he played the second half against Wilcox.

In addition to playing linebacker, Noble is the team’s long snapper and will also get some reps at fullback. Punter Diego Fisher returns after having his season cut short in 2015 due to injury. In Saturday’s scrimmage, Smith said Fisher averaged 50-plus yards on his punts.