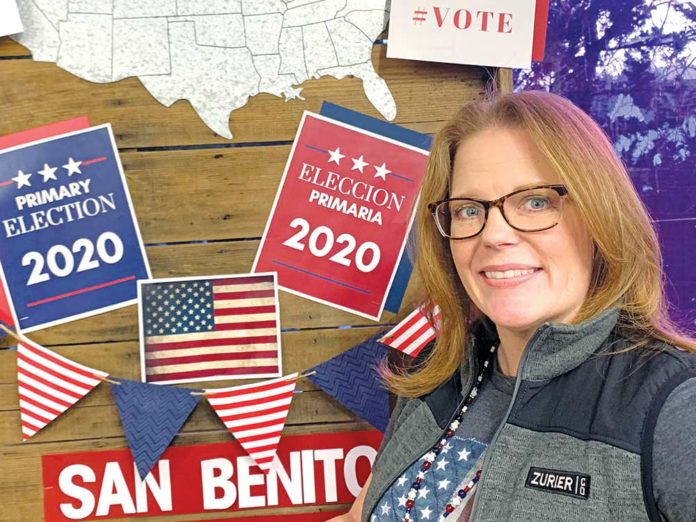 To find your polling place, go to http://sbcvote.us/

The Elections Office, at 440 5th St., Hollister, has been open for early voting on weekdays 8am-5pm, since Feb. 3, and voting will continue through Election Day, March 3.

San Benito County voters have the choice to vote by mail or at their specific polling place location. Many voters have already voted by mail. Election officials expect 70 percent of county voters to cast mail ballots.

Voter kits sent to voters earlier this month indicated where they need to go on Election Day for in-person voting. Voters must go to the correct location, or they will be redirected to their polling place or offered the opportunity to cast a vote as a Same Day Registrant, which is similar to a Provisional  Ballot.

Voters who are not registered may register to vote up to and including Election Day, at the Elections Office.

The voting system equipment is the same as was used in both the Primary and General Election in 2018.

Voters may return vote-by-mail ballots by mailing them in the special envelopes to the San Benito County Board of Elections, 440 5th St., Hollister 95023, or by returning them in person to a polling place, the ballot drop-off location at Winn Alley at 5th Street or the Elections Office before 8pm March 3.

Vote-by-mail ballots that are mailed must be postmarked on or before Election Day and received by the county Elections Office no later than three days after Election Day.

If voters are not sure if their vote-by-mail ballots will arrive in time, they may bring them to any polling place in the state between 7am and 8pm on Election Day.

Voters who did not receive a voters’ kit can get one at the Elections Office.

In most cases, California voters are not required to show identification at their polling place. However, the Secretary of State’s office said it is a good idea to bring identification when people vote for the first time. A poll worker may ask to see identification if a person mailed in a registration application and did not include a driver license number, California identification number, or the last four digits of a Social Security number.

WHERE DO I VOTE

Are you registered? What is your polling place?