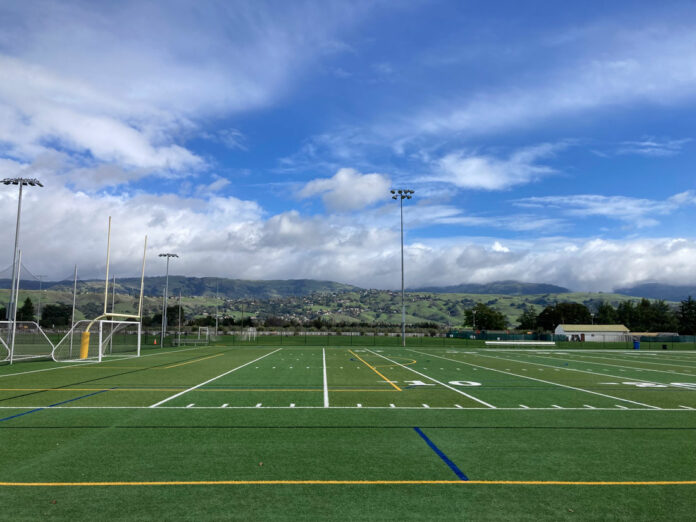 Indoor football team will practice in Morgan Hill for 2023 season

The Indoor Football League’s Bay Area Panthers team has chosen a South Valley sports venue as their practice location for the 2023 season, according to the team.

The Panthers’ move to the Morgan Hill Outdoor Sports Center includes about 25 players, eight coaches and the team’s operational headquarters for the season, which takes place March through August. The team and its staff will use the OSC, as well as other recreational facilities, local hotels, meeting spaces, apartments and office spaces, says an announcement from the City of Morgan Hill.

The Panthers will continue to play home games at the SAP Center in San Jose.

Fans will have their first chance to welcome the Panthers to the region at a Jan. 26 “Meet the Coach” event at the Morgan Hill Community and Cultural Center, where attendees can meet Panthers General Manager and Head Coach Darren Arbet.

Though the 2023 season will be Arbet’s first as the leader of the Panthers, Arbet comes to Morgan Hill with a decorated career as a coach and player. Formerly the longtime coach of the San Jose SaberCats of the Arena Football League, Arbet is an Arena Football Hall of Famer. The SaberCats won four ArenaBowl championships with Arbet as head coach, before the team disbanded in 2015.

And Arbet comes to Morgan Hill with local connections too, as he lived in San Martin during a portion of his career with the SaberCats. He also knows Morgan Hill resident Jeff Dixon, a former operator of the city’s OSC on Condit Road.

“The first phone call I made when I got the job (as Panthers head coach) was to Jeff Dixon, and I talked to him about how we can get to Morgan Hill to practice,” Arbet told this newspaper. The Panthers were set to hold practices in Livermore at that time.

Starting in October 2022, Arbet was on Zoom meetings with City of Morgan Hill officials and tourism proponents. Everyone was excited about the Panthers’ interest in partnering with Morgan Hill.

“Morgan Hill is a place you want to raise your kids, a place you would love to retire at,” Arbet said. “Morgan Hill has ‘all of the above,’ and the people there are very friendly and willing to help.”

The city’s effort to attract the Panthers to town included site tours and negotiations with Visit Morgan Hill, the city’s recreation and economic development departments and the OSC operator, says the city’s announcement. The move will also provide local jobs, and will be a boon for small businesses.

“This partnership is possible thanks to a collaboration between Visit Morgan Hill, the Morgan  Hill Outdoor Sports Center and the City of Morgan Hill,” Morgan Hill Public Services Director Chris Ghione said. “We are thrilled to have the Bay Area Panthers choose Morgan Hill for their practice location and are honored to support the Panthers for a successful season.”

The Panthers’ choice to locate in Morgan Hill in 2023 also confirms the city’s attractiveness for sports and recreation.

And the Panthers plan to give back in bigger ways, Arbet said. The team’s 25 players will “be out in the community” visiting local students, giving away tickets to games, hosting camps for underprivileged youth, “helping build things, talking to kids,” Arbet said.

That aspect of the team’s contribution to their community is important to Arbet, who grew up without significant means. He ultimately benefited from similar philanthropic opportunities provided by outside organizations, enabling him to reach high levels of education and athletic competition.

“I want to give back, I want to do camps, I want young men and women to come to our games who can’t afford to and have that opportunity if they want to come,” Arbet said. “This team needs it, Morgan Hill needs it—we just need everyone to get excited and get this going, and help young kids in sports.”

The Panthers’ players will report to camp in Morgan Hill March 9, and begin practicing at the OSC March 12. The team will play 15 games in 2023, with seven home games in San Jose.

The Panthers’ new corporate headquarters is located on Church Street in Morgan Hill.