San Juan Bautista’s Anthony Montoya faces a trial confirmation Tuesday in connection with charges that he had maintained an indoor marijuana growing operation at his home.

Authorities arrested Montoya, 33 at the time, last February after serving a search warrant in the first block of Powell Street. Authorities alleged to find what they called an “underground, sophisticated marijuana grow operation with 341 plants in different stages of growth,” according to a statement from the sheriff’s office.

Montoya’s trial confirmation is set for 2 p.m. Tuesday in courtroom 101 at the courthouse. It had been scheduled last week but was continued.

In other court matters this week:

• The three suspects in the 2011 Park Hill homicide of Mark Arballo are set for a trial setting Thursday, according to court records.

Their trial setting had been scheduled earlier this month but was continued. The hearing is now set for 9 a.m. Thursday at the county courthouse.

The three suspects who remain in adult court were bound over for trial in November for the January 2011 slaying.

Conrad Copado, Ray Gonzales and Isaiah Mendoza face adult homicide charges. They face respective allegations of first-degree murder along with other gang-related felonies. Due to their ages at the time of the murder and other circumstances for each suspect, potential exposure varies from 35 years to life in prison to life without parole. All three suspects are county residents.

Three other prior defendants are no longer in adult court – two had those charges dismissed in July after respective interviews with police. Those juvenile cases and their records are no longer open to public access. Five of the six initial suspects facing charges were juveniles at the time of the Jan. 4, 2011 beating of Arballo on Park Hill. Copado, 21 at the time, was the only adult suspect.

Arballo, 39 at the time, sustained major injuries to his head and died in a hospital about a month after the assault. Authorities alleged it was a gang-related homicide and retaliation against Arballo for being a witness to another crime.

• The three suspects arrested in connection with a Caputo Court assault also will be in court Thursday.

Jacob Vargas, 21, David Villarreal, 24, and Larry Quiroz, 20, face charges in adult court, while one of the original five suspects was charged in juvenile court. A fifth suspect arrested in September is not listed in court records.

They are set to have their preliminary hearing scheduled at the 2 p.m. preliminary setting Thursday.

Police reported that a Hispanic male adult sustained injuries from being kicked, punched and having glass bottles broken over his head and face – after gang members had asked him where he was from and proceeded to attack him when he said he was not from Hollister.

Friends of the victim told police they were helping him get away and were shot at in the process. 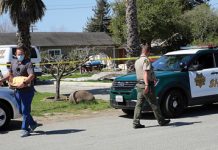