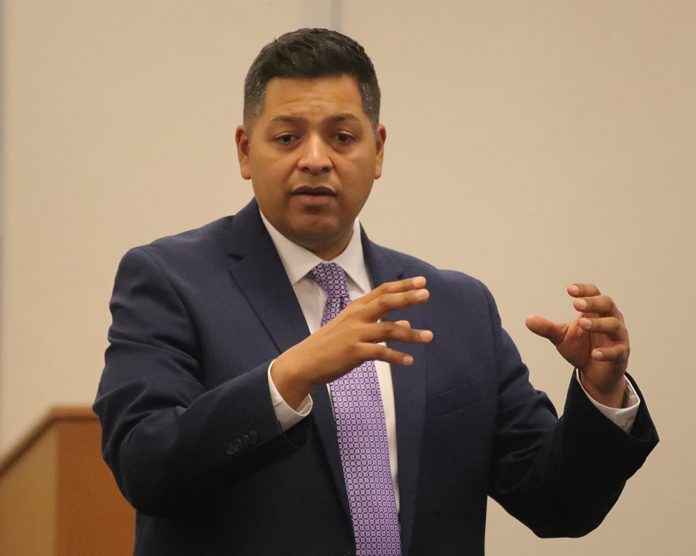 Diego Ochoa to step down at Hollister School District

Superintendent will stay until the end of June

The Hollister School District announced that Superintendent Diego Ochoa is stepping down from his position at the end of June.

He is expected to submit his resignation to the board of trustees, according to a press release issued by school officials on May 19. Ochoa will accept a similar position in the San Mateo-Foster City School District pending board approval in the 2021-2022 school year.

Ochoa plans to remain with the district through June 30 before joining SMFCSD, pending board approval.

Ochoa has served as superintendent since the 2018-2019 school year. The district has approximately 6,000 students at ten schools in grades Transitional Kindergarten to eighth.

Ochoa led the district’s efforts to coordinate new school configurations, helping relieve some of the overcrowding issues at middle schools and a lack of classroom space at multiple sites.

He worked with the Board of Trustees to create more TK-8 campuses and develop new school boundaries.

“Long-range planning is an essential part of a healthy district,” Ochoa said. “With some smart, focused decision making, we were able to address classroom space and equity issues confronting the district.”

Ochoa plans to stick around for the ribbon-cutting ceremony for Rancho Santana School, which is the new $52 million dollar campus that was built to serve up to 850 students.

He selected Director of Facilities Aaron Buzzetta in 2019 to lead the project.

“School construction is a results-based business. You are protecting the taxpayer’s money and building something that will last generations,” Ochoa said. “I can honestly say that the Rancho Santana School campus has far exceeded my expectations. It is an absolute gem and Aaron should be recognized for his stewardship of the project.”

During his tenure, Ochoa also assembled a team led by Director of Special Education Gwen Baquiran.

“Diego used innovative approaches to capitalize on the strengths of the special education management team and really invested in special education,” she said. “He combined a focus on relationships and systems to move the needle in our district.”

Ochoa led the district in adopting reading, new math, ELD and science curriculum, according to the press release. The district improved arts education in concert with the San Benito County Arts Council.

“Since he arrived, Diego has brought stability to the district,” School Board President Jan Grist said, “He has helped us improve academics, staffing, special education and equity. He has been collaborative with our unions and has also developed a very strong team of administrators. We’ll miss Diego, but we are confident that our team is ready to carry on.”

“We worked collaboratively to move our hiring timelines up by three months,” Assistant Superintendent Erika Sanchez said, “We attended job fairs together and helped vet top candidates. More than anything, he and I worked together to hire the best and brightest.”

The Hollister Police Department will conduct a DUI and...
High School Sports

For as long as she can remember, Kendra Melching...
Local News