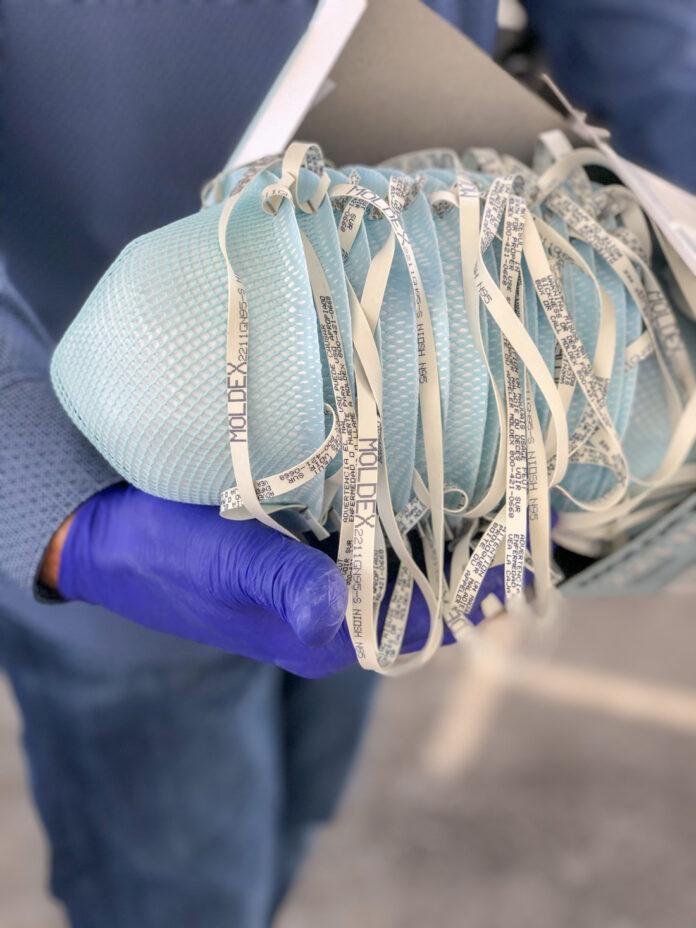 The City of Hollister is moving forward with a new ordinance that will impose steep penalties for those caught not wearing a face covering in accordance with state guidelines.

The city council on Sept. 21 heard from a flurry of residents and business owners opposed to the new local penalties before officially approving a “Face Covering Ordinance” on a 3-1 vote. The ordinance will adopt the California Department of Public Health’s guidance for the use of face coverings to be enforceable by administrative citations.

In accordance with the San Benito County Health Department, anyone who violates the guidance is subject to administrative citations and could be issued a fine of $100 per violation. Councilwoman Honor Spencer voted against the ordinance.

“I’ve had a problem with this ordinance from Day 1,” she said. “I don’t like a fine, I don’t like anything. But I really just wanted to say that I’m very, very saddened of the shaming that I’ve heard tonight from some of these speakers.”

The ordinance does not address any fines or penalties on businesses. City Manager Brett Miller said the ordinance is based on other local agencies such as the city of Monterey, Santa Cruz and most recently San Juan Bautista.

San Juan Bautista became the first city in San Benito County that can issue citations to people for not following the state’s Covid-19 face covering guidance. The city council on Aug. 18 unanimously voted to adopt a new executive order for anyone who violates the guidance. They can be subject to a citation starting at $100 for the first offense, with subsequent fines of $500 and $1,000 based on repeated violations.

Face coverings are required to be worn when people are waiting in line to enter or inside essential businesses such as a grocery store or pharmacy, according to state law. They must also wear a mask when seeking health care, waiting for or riding transit and entering facilities such as government buildings.

Some exceptions to wearing face coverings include those staying at home and those riding in their car alone or solely with members of a household. Other exceptions include exercising outdoors such as walking, hiking, bicycling, swimming or running.

However, when exercising, people are recommended to have a face covering with them and readily accessible, even if they’re not wearing it at that moment.

Hollister Councilwoman Carol Lenoir said it seemed like some of the public speakers during Monday’s meeting were not up to date on the California Department of Health guidelines for exemptions.

“Because I keep hearing it,” said Lenoir, who was referencing several people who argued that they don’t want to wear a mask when they’re walking, exercising or because they have a medical condition. She read the exemption list and pointed out one of the specific guidelines to one of the speakers.

As of Sept. 22, San Benito County continues to be at the purple “widespread” risk level but the case rate dropped down to 4.9 daily new cases per 100,000 residents and a test positivity rate of 4.5 percent for the week ending Sept. 12.

The limits for the “widespread” tier are no more than seven daily new cases per 100,000 residents, and a positivity rate less than 8 percent.

At a minimum, counties must remain in a tier for at least three weeks before moving forward from the purple “Widespread” tier to the red “Substantial” tier after meeting the criteria of the less restrictive level for 14 consecutive days.

To move forward, a county must meet the next tier’s criteria for two consecutive weeks. Data is reviewed weekly and tiers are updated on Tuesdays.

“I think we should concentrate on prevention because we’re this close, very close, to Tier number two,” Lenoir said. “These are solutions. There’s performance to get where we want to be.”

Lenoir said she realizes economics is important and she knows people’s livelihood, and their business, are severely impacted. But she said she must put the health of the citizens before economics.

“The answer to lower the positivity rate and get the mask off our face is more people testing,” she said.

Longtime Hollister resident Lauretta Avina phoned in to say she supported Lenior in terms of believing in the science behind Covid-19. Avina said she was taken aback by the comments made throughout the evening.

“I was shocked at the selfishness that I heard from our speakers tonight,” she said. “All I heard was I, I, I. This, as you said, is a collective problem. It is a pandemic, it is not the flu.”

Avina said that science has proven that masks help prevent the spread of the novel coronavirus. She also mentioned that the American with Disabilities Act exists for those who can’t wear a mask and have an underlying condition.

“We are not violating your constitutional rights if you are being denied service because your presence is threatening the health of the collective,” she said. “That’s what it’s all about. It’s the needs of the many outweigh the needs of the few. And it is the few who do not believe in wearing masks.”

San Benito County Supervisor Peter Hernandez chimed in about going against the enforcement of face coverings in Hollister. He mentioned that Houligan’s restaurant just shut down and plenty more small businesses will close in the near future.

“I’m all for protecting public health but when you’re dealing with a mask that actually doesn’t discourage six-foot distancing,” he said. “It actually encourages, by default, less than six feet distancing.”

Vivian Stubblefield of Hollister said she’s against the face covering ordinance because she doesn’t believe there’s a pandemic. She said “no-mask” is useless and there isn’t an emergency.

“There is an emergency and that’s for our businesses going out of business left and right,” she said. “It’s just sad to see that. I’m sure it makes some of our leaders happy but for shame. They don’t care for the people and they are against the people, they should be for the people.”

A salon owner from San Juan Bautista stood up at the podium and said her place has been shut down since March 11. She mentioned they were open for a month but they had to close again because of the protocols.

She said the new ordinance and $100 fine has deterred people from doing business in town.

“Because if they feel if they have to wear a mask out in the open air, they just feel violated,” she said. “This fine thing is really upsetting people. I’m not the person to be upset because I understand you have a job to do but we’re trying to work and it’s diverting business from our cities. I’m pleading with you guys, please don’t do fines because most people wear [masks].”

Several other residents including Vedana Freitas phoned in to share their displeasure with the new ordinance. She mentioned that the vast majority of people already wear a mask.

“You already have people following along and now you want to mandate and start imposing fees and I think that was a mistake,” Freitas said.

Freitas warned that if the mandate passed then business in Hollister could take a big hit because people would stop going out.

“We’re not going to come down anymore to support your businesses as much as we want to, we just aren’t going to do it,” she said. “This council would be putting a nail in the coffin of your business.”

Freitas said they set up a GoFundMe page to raise money for those who get a citation and they are asking for donations to help raise the pot to $10,000, which she believes they can achieve.

“I just wanted to speak to the people,” she said. “I’m not interested in speaking to the city council because I don’t think they can be reasoned with at this point.”

Ryan Jones of Hollister said the city council’s “tyrannical behavior needs to end” and that a vote to implement the ordinance would further divide the community.

“This doesn’t solve anything you guys,” he said. “You will be held liable for this and I want everybody sitting here right now, ask yourselves, ‘What will this truly accomplish?’”

A Hollister juvenile was arrested on suspicion of felony...
Local News

The Accelerated Achievement Academy in Hollister has been named...
Guest View

The past year and a half has been extremely...