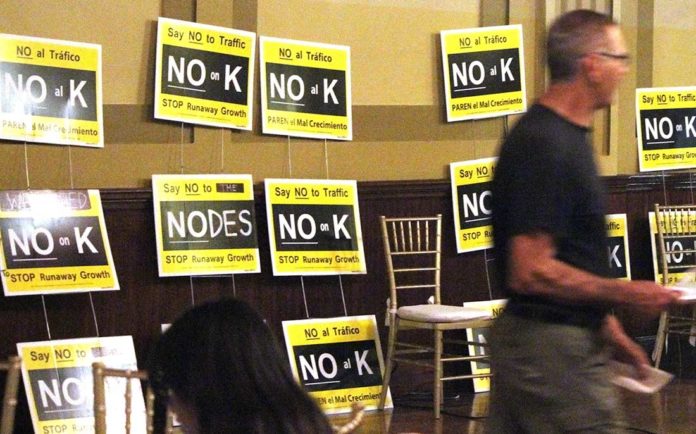 The owners of four properties along Highway 101 are expected to apply for a different commercial zoning designation after voters appeared to have rejected San Benito County’s Measure K.

A successful signature-gathering campaign by citizens group Preserve Our Rural Communities halted the ordinance’s implementation, and put the question on the March ballot.

The four interchanges, known as “nodes,” outlined in the ordinance are the Betabel Road and Highway 129/Searle Road interchanges in San Juan Bautista, and the Rocks Ranch and 101 Livestock Market interchanges in Aromas.

With just 750 votes remaining to be counted as of March 10, nearly 60 percent of voters rejected Measure K.

Regardless of the outcome of Measure K, the property owners can apply for “C-1” commercial zoning.

The C-1 zoning classification shares many similarities with the C-3 zoning in terms of building standards and permitted uses. However, it is less restrictive in other areas, such as landscaping, theme and tourism.

In an earlier interview with the Free Lance, San Benito County Supervisor Anthony Botelho said the C-3 zoning specifies where the commercial nodes outlined in the General Plan will be located, whereas C-1 does not.

“In the General Plan, a node is an unspecific area,” he said. “In C-3, we were going to restrict it and identify it. That’s a big, big difference.”

A C-1 zoning change for the Betabel property was recommended by the county planning commission in November, and Botelho expects it to come before the board of supervisors in late March.

Andy Hsia-Coron of Preserve Our Rural Communities said the group is “examining our legal options” if the supervisors approve the C-1 zoning.

“We believe that this is a runaround to our referendum and shows contempt for the voters who just strongly rejected these proposals,” he said. “If the supervisors move to approve this they are showing they have neither respect for the democratic process or the rules governing zoning.”