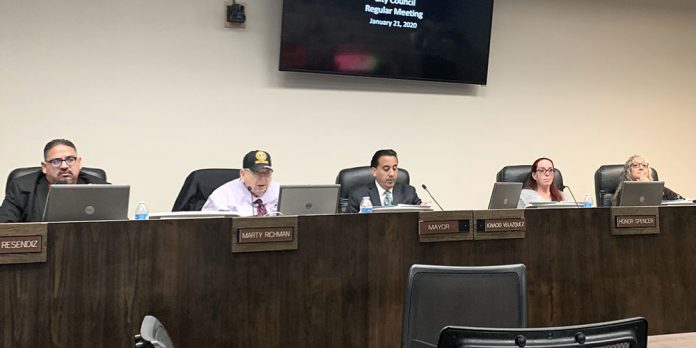 Velazquez announced the investigation in a written statement to the Free Lance before the Jan. 21 city council meeting and repeated the allegation several times in public remarks at the meeting, without mentioning Gomez. At the meeting, Velazquez also implicated his mayoral opponent, Honor Spencer, in the alleged incident.

In a Jan. 22 interview with the Free Lance, Gomez said he had spoken with Hollister police about text messages sent to Councilmember Rolan Resendiz. A copy of the police report obtained by the Free Lance said one of the text messages called Resendiz “fagot.”

When asked if he sent the texts, Gomez said, “Absolutely not.”
“That’s not my personal feeling about the LGBT community. I’m very disappointed to even be associated with that word being used—it’s very disheartening,” he told the Free Lance.

“I’ve never sent anybody any threatening text messages or anything like that.”

In a written statement, Gomez said:

“ I’m sickened by this information. Anyone who knows me knows that I would never use any kind of language like that. I’m disgusted that any of that type of language would even be associated with me. If he truly received an offensive message, it is very disappointing and I’m sorry to hear that, but it certainly didn’t come from me.

I will personally investigate whether anyone of my former contracted or campaign volunteers exhibited that type of behavior in any of my campaign phone banking centers using any devices I’m associated with. I do not support any of that type of rhetoric and I’m personally disgusted by it.

It’s also very disheartening that the mayor is using this as a deflection because his buddy was facing punishment for his own offensive behavior on social media against myself, members of the City Council and dozens of women, yet he has amazingly no problem with that. The mayor needs to stop pointing fingers and be a real leader, instead of attacking members of the community that disagree with him.”

A redacted copy of a Dec. 15 Hollister Police Department report confirmed details of the mayor’s account of the complaint by Resendiz, except that no suspect’s name was visible. Police classified the case as “repeated malicious phone calls,” a possible misdemeanor.

The police report said Resendiz had received a text message from an unfamiliar number on Dec. 5 that called him a “fagot,” plus other harassing messages over several months. The police report said “Resendiz openly and publicly identifies as gay, and ‘fagot’ [sic] would be an insulting and derogatory term aimed towards a member of the homosexual community.”

Velazquez said City Attorney James Epperson had confirmed to him that police had traced that text message to Gomez.

“There is no room in our community for hate of this type,” the mayor told the Free Lance.

Resendiz said before the Tuesday council meeting that he could not comment, except to confirm that he had filed a police complaint.

Acting Police Chief Carlos Reynoso also confirmed that Resendiz had filed a complaint, but said he could provide no details or identify the object of the complaint because his department’s investigation of the matter had been turned over to District Attorney Candice Hooper for review. Asst. Dist. Atty Ellen Campos said, “Our office has recently received a report from HPD. We are in the process of gathering more information and reviewing the case.”

Velazquez and Gomez have been bitter political rivals since Velazquez took office in 2012 as the city’s first elected mayor. Gomez did not seek reelection to the council in 2016, and started his Pinnacle Strategy consulting firm. He is a consultant and advocate for local businesses, including real estate developers, manufacturers and cannabis producers. He also was involved in political campaigns in 2018 for Spencer and against Resendiz.

Gomez on Jan. 22 said, “I have two projects I’m working on in Hollister and as soon as I wrap them up, I will not be doing any work in Hollister. I’m taking my work elsewhere. I have no desire to work in the City of Hollister. The infighting and political climate in Hollister and San Benito County is something I’m not used to.”

The mayor said in his Jan. 21 statement: “Mr. Resendiz reported the text to the local police on Dec. 15, a potential hate crime because he is the first openly elected gay official in San Benito County history. A few days later Councilmember Honor Spencer made a motion to censure Council member Rolan Resendiz at the next Hollister City Council meeting.”

Velazquez further alleged in his statement:

“After an initial investigation by the police department, the phone number used was linked to former Councilmember Victor Gomez. There is an ongoing investigation still pending to see what crimes may have been committed and who else may have been involved.”

At the meeting, Velazquez asked Spencer to recuse herself from Tuesday’s censure vote because “she may have been involved in a hate crime” against Resendiz.

Spencer declined, saying, “This allegation is the first time I have heard of it. I am very disheartened that you would even think I would do something like that.”

“I am not involved in a hate crime,” she said.

Resendiz said, “We all have an obligation to stand up against bullying, harassment, discrimination of any kind and in particular homophobic slurs.”