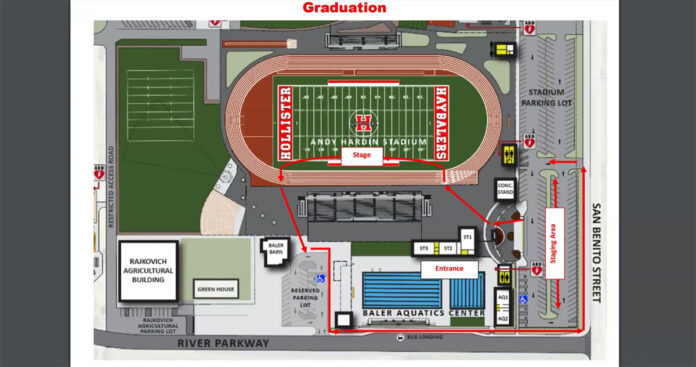 San Benito High School announced last week that it will host an in-person commencement ceremony for Class of 2020, no internet required.

Graduation Coordinator Brian DeCarli posted a video on YouTube that talked about a plan for the graduation to take place at Andy Hardin Stadium over the course of four days from June 1-4.

“San Benito High School will in fact be able to recognize its seniors over a four-day period,” said DeCarli in the video.

Graduates would be split up into groups of 60 to receive their diplomas from a family member. Two parents or guardians from the same household are allowed to accompany each graduate into the ceremony.

San Benito High had originally planned for a virtual commencement ceremony like most schools in California.

DeCarli said the new plan was approved by the San Benito County Health and Human Services Agency. Face masks will be required of all who enter the stadium and various health and safety measures will be implemented.

DeCarli mentioned that frequently touched surfaces such as the hand rail for the stage will be disinfected. Diploma jackets will be individually disinfected too.

The 60 families will be staged in the football parking lot and will be asked not to leave their cars until a campus supervisor calls them up. Family members will follow the markings on the ground that will lead them into the stadium, across the stage and back to their cars.

DeCarli said some of the details such as graduate dates and timelines should be announced this week.

“I am working diligently to provide all of the information to you as soon as I possibly can,” DeCarli said.The video can be found here: https://youtu.be/ivC8qIbLOig