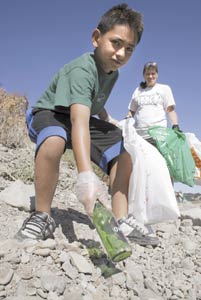 This year’s annual California Coastal Cleanup will take place all month in September, and begins at our own front door and in our own communities.

Due to the Covid-19 pandemic and limits on public gatherings, the California Coastal Commission announced that cleanup events will occur in a more loosely organized fashion throughout September. Each Saturday in September from 9am to noon, Californians are encouraged to help keep the coast clean by sweeping through their own neighborhoods and local parks, creeks, streams, rivers and the coast (where accessible) to help prevent single-use plastic items and other litter from polluting the environment.

This year’s California Coast Cleanup will be the 36th annual event. Year after year, the state’s residents continue to show they care about the environment by supporting the coastal commission events, reads a press release from the California Coastal Commission.

Due to the ongoing pandemic, Coastal Cleanup organizers across the state recognized that hosting traditional cleanup sites with large gatherings of volunteers would not be safe this year, says the press release. However, Californians can honor the spirit and intention of the cleanup while staying close to home and following public health guidelines. Trash in the streets will become beach and ocean pollution once the rains begin.

“The idea behind the cleanup this year is pretty simple actually: everything in California flows downhill to the coast,” said the Commission’s Executive Director Jack Ainsworth. “We may not be able to visit or gather at the cleanup sites that our volunteers have taken such good care of over these many years, but that doesn’t mean we can’t still have a positive impact on the health of the coast and ocean.”

Volunteers are asked to download and use the Clean Swell data collection application for their smartphones in order to record their finds and be counted toward the volunteer and trash totals, or to fill out and submit a paper data card, available in both English and Spanish. The event emphasizes cleanups on the four Saturdays in September as a way for neighbors to see one another conducting cleanups at the same time and bring a sense of community to the cleanup effort. However, neighborhood cleanups taking place anytime throughout the month of September can count towards the overall cleanup.

To find out how to join the effort, visit coastalcleanupday.org. Complete guidelines for conducting a neighborhood cleanup, along with other resources to help plan and prepare, are available there, as well as the websites of local coordinators around the state. Check the website for updates and share your cleanup experience on social media using the hashtags #coastalcleanupday and #protectyourhappyplace. California Coastal Cleanup Day is part of the International Coastal Cleanup, the world’s largest volunteer event.