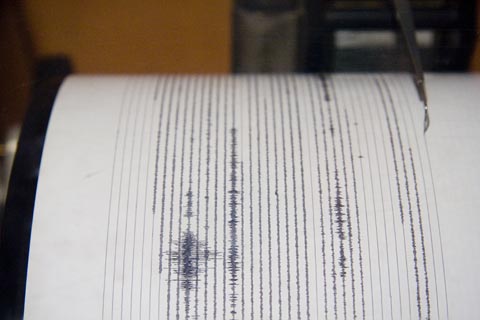 Every time there’s an earthquake in California, you’ll know it immediately—if you’re online.

The moment a temblor strikes, night or day, big or small, a stream of one-word tweets or texts will inevitably show up in your feeds: “EARTHQUAKE.”

That’s what happened early Monday, when a 4.0-magnitude earthquake jolted people awake in the areas surrounding Inglewood, and was followed a short time later by a 3.3-magnitude quake nearby. As The Los Angeles Times reported, they were part of a swarm.

And on Wednesday, a 3.7-magnitude quake shook western Fresno County.

While none of the earthquakes caused significant damage, they are — like all earthquakes that, mercifully, aren’t catastrophic—good reminders to prepare for a “Big One,” which has recently become a little more likely.

Here are the answers to some questions you may have:

Hold on — a big quake is more likely than it was previously?

Yes! As my colleague Henry Fountain disconcertingly reported last year, an analysis of changes along earthquake faults in Southern California suggested that the pair of big earthquakes that occurred near Ridgecrest over the July 4 weekend in 2019 (remember that?) changed the stresses along the nearby Garlock fault.

If there was a major quake on the Garlock fault, it could set off one on the San Andreas, which is much bigger. But that increased likelihood decreases over time.

So should I not worry about an earthquake?

Well, I don’t know about “worry.” But you should definitely prepare.

If you’re like me, you may be determined to quake-proof your life for approximately the first two hours after you are rattled by a temblor before other, more pressing, life matters present themselves.

But as experts have told me, that is not a great approach. As our friends at The Los Angeles Times who love frightening us helpfully put it in 2019, much of the state is a “tectonic time bomb.”

And once a big earthquake hits, you’re already behind.

OK, what should I do?

As Jacob Margolis, a journalist with KPCC who made “The Big One” podcast, told me in 2019 after the Ridgecrest quakes, one thing you should not do is run to the nearest doorway when you feel shaking. That is a myth.

But do get under a table and cover your head.

You should also consider putting shoes next to your bed in case you have to navigate around broken glass in your home, and know where you can find documents you may need for disaster recovery. (Think of things like your Social Security card or birth certificate.)

Of course, the hard part is putting together an earthquake kit.

What should be in my earthquake kit?

According to Eve O’Neill, a writer for Wirecutter, the product recommendation site owned by The New York Times Co., the top item you’ll need is water, since you could be without it for weeks, and you’ll need better storage for it than a Costco pallet of plastic bottles. You’ll also need a gas shut-off tool.

Flashlights, headlamps, first-aid supplies and phone chargers are also recommended, in addition to a list of emergency contacts.

You can find more about the seven items you need for a starter earthquake kit at nytimes.com.