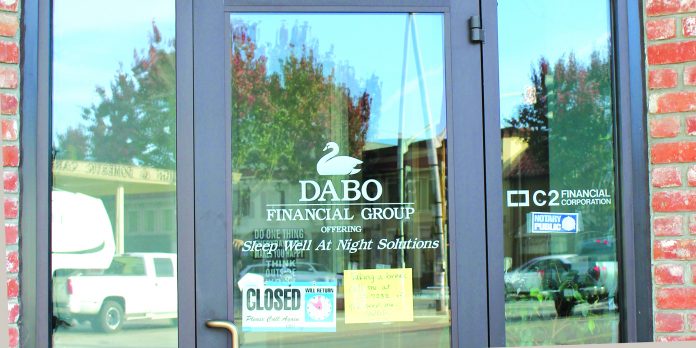 More than a year after a Superior Court judge ruled that former county school board president Mitchell Dabo had illegally transferred more than $644,000 from a charitable trust to his personal bank accounts, District Attorney Candice Hooper says she will file no charges.

In a Dec. 20 email to the Free Lance, Hooper faulted the Hollister Police Department for providing insufficient evidence, and failing to provide evidence of criminal intent.

“We concluded that with no further information forthcoming, we could not proceed with a criminal case,” Hooper wrote in the email sent on her behalf by Assistant District Attorney Ellen Campos.

When informed of the district attorney’s statement, Police Chief David Westrick said in email: “We believed there was sufficient evidence to merit at least some charges [against Mitchell Dabo] but ultimately it is the DA’s office decision to move forward or not.”

“Not all cases have confessions or overwhelming evidence,” Westrick wrote.

The chief declined this week to say when he communicated to Hooper his recommendation, or if his detectives had ever interviewed Dabo or sought to obtain additional evidence such as bank records, with a warrant or subpoena.

The chief declined to say this week when he communicated to Hooper his recommendation, or if his detectives had ever interviewed Dabo or sought to obtain additional evidence such as bank records, with a warrant or subpoena.

He added: “The level of proof is different for a civil court versus criminal court.”

The Dec. 20 email was Hooper’s public first comment on the Dabo case in nine months.

The district attorney did not say when she reached this conclusion, and refused to answer any questions about the case, or about her decision not to prosecute.

She said she had hired a forensic accountant to look at the evidence, but did not say whether police ever interrogated Dabo, or whether she or the police followed up on names of other possible victims.

While complaining about insufficient evidence, Hooper didn’t say whether her office or police had ever sought or obtained a long list of potential pieces of evidence that had been unsuccessfully sought by the Community Foundation for San Benito County in the civil case, which could have shed more light on Dabo’s personal finances.

Foundation officials said Dec. 21 that Hooper never contacted them in 2018 and did not return their phone calls.

Before their deaths, Barbara and Tony Matuiich of Hollister had created a charitable trust, stipulating that all proceeds would go to the Community Foundation for San Benito County upon their deaths. After Barbara’s death in 2012, the foundation learned that nearly all of the remaining money—approximately $644,000—in the trust was gone. Dabo was the trustee of the Matulich Trust and a a lifelong friend of the Matulich family. When he failed to offer an explanation for the missing funds, the foundation went to the police and to the district attorney, who advised its leaders to sue him, which it did in 2017.

Dabo provided documents to the court in the civil lawsuit that showed he had drained money from the fund for his personal use, including unsecured loans to friends. One of the pieces of evidence he provided was a check made out to him for $21,000 drawn on the trust’s account and signed by him.

Dabo did not contest the lawsuit brought by the foundation, and in November 2017 the judge ordered Dabo, a financial adviser and tax preparer, to pay $1.74 million. None of this has been paid, according to the foundation.

Officials of the foundation, which had hoped to distribute the trust fund money to local charities, expressed frustration and disappointment when informed of Hooper’s decision.

“My board chair, Phil Fortino, has reached out many times to the DA’s office asking the same questions you have, and we have not heard back at all,” foundation CEO Gary Byrne said in an email to the Free Lance.

“We dropped off all documents related to the case to the DA’s office and never heard back,” Fortino said.

Numerous requests from the Free Lance for interviews and comments from Hooper throughout 2018 were ignored or rejected.

Here is a complete text of the district attorney’s Dec. 20 statement:

“This case was initially referred to us by the community foundation, who provided us with documents for us to review. It appeared that the attorney handling the civil lawsuit was the source of most of the documents that were passed on to us.

“We consulted with a DA from a neighboring county who has some expertise with these kinds of cases and a forensic accountant. Both said that in order to prove criminal liability and criminal intent, we would need more information and documents than what was provided to us.

“We told the community foundation to refer the case to the Hollister Police Department for investigation.

“At this time, it was our conclusion that we could not prevail in a criminal court because criminal intent could not be proven beyond a reasonable doubt; and that, in fact, the case should be adjudicated in civil court.

“When the Hollister Police Department sent the case to us to review, they did not provide any additional evidence or information. Nor did we receive any further documents or information from the foundation’s law firm.

“After taking this into consideration, along with another consultation with the forensic accountant, we concluded that with no further information forthcoming, we could not proceed with a criminal case. At this point, the community foundation had already won a judgment against Mr. Dabo in a civil lawsuit.”

According to documents provided by Dabo himself in a civil lawsuit brought by the San Benito County Community Foundation, the draining of nearly all funds from an $800,000 trust began in 2009 and continued after the death of Barbara Matulich of Hollister in 2012.

A 217-page binder containing the evidence gathered by John Clark of Morgan Hill, the foundation’s lawyer, and affirmed by a Superior Court judge at the Nov. 13 civil trial included trust bank statements, canceled checks, emails and court documents detailing the systematic draining of funds from the charitable trust by Dabo.

Hooper said in late November 2017 that she would ask a special forensic accountant to look at the civil court evidence and investigate possible crimes by Dabo, a self-described financial planner and tax preparer. Hooper sent the binder to the Hollister police investigators in December, and on Dec. 12, 2017, the police department officially opened its investigation, Capt. Carlos Reynoso confirmed this month.

The binder included copies of canceled checks from the trust signed by Dabo and evidence of electronic transfers from the trust to a Mitchell Dabo Associates bank account.

The canceled checks included numerous checks made out to “cash” and signed by Dabo, in amounts ranging from $2,700 to $21,008; three checks, totaling $490,000, to the late Jack Tyler, Dabo’s friend and former business associate; one check, for $3,000, to Barbara Matulich dated three weeks after she died in March 2012.

The money in the Matulich trust had been earmarked for nonprofits served by the Community Foundation for San Benito County, which received just $82,110 from the trust. The foundation said in court papers that Dabo had offered no explanation for the missing funds.

In November 2017, a week after the civil court judgment, Dabo, in his only public comment in the case, apologized in a signed online statement for what he called “a costly mistake.” He has repeatedly declined requests for interviews.

Dabo was an elected member of the county board of education, and served as its president in 2017-18. He did not seek re-election in 2018.

Byrne said earlier this year that several individuals had reached out to him, alleging they were victims of fraud or theft by Dabo, but he said none had agreed to come forward.

Fortino said last year he was hopeful there would be a criminal investigation and that additional victims would come forward. “There are others who have said they had a similar experience,” he added.

Reynoso said earlier this year that no additional possible victims of Dabo had come forward, and that police had not interviewed any. He added that anyone who believes they were the victim of fraud or theft in their dealings with Dabo should contact Hollister police at (831) 636-4330.

He said Hooper has sent the case back to police twice, and both times it was sent back to her office. He declined to say whether or not police had recommended prosecution.