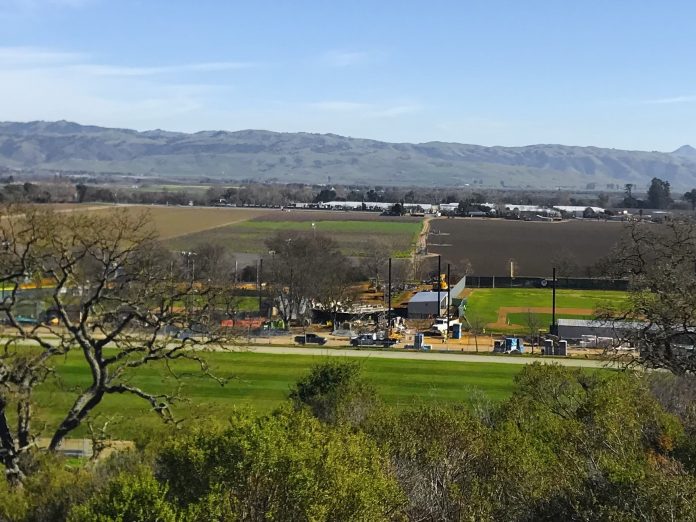 Nearly $7 million in upgrades to the outdoor athletic facilities at Gavilan College are in full swing. The end result will put the local community college in a league of its own.

The multi-faceted project, which provides a complete overhaul of two existing sports facilities and adds a new sport venue to the school’s athletic cache, has three funding sources: Measure E, a local lease revenue bond and the college’s general fund.

With the work having started back in July 17, 2017, the baseball field renovations include two new dugouts for the home and visiting teams as well as a new backstop. The adjacent softball field will be equipped with a large scorekeeper building and an ADA accessible bleacher. Both fields will also undergo drainage improvements.

In addition, four new outdoor sand volleyball courts with new fencing and gates are in the process of being installed.

Spectators will be treated to an athletics field plaza and walkways to both fields. Construction, which was approved by Gavilan’s Board of Trustees in June 2017 and slated for completion by March 22, will include a new restroom, locker room buildig and outdoor plaza with new landscape and concrete walkways.

“It’s going to be huge,” Gavilan Athletic Director Ron Hannon said. “There’s no way to underestimate the impact it’s going to have on these programs’ ability to recruit and ability to stay with modern times that so many other schools have enjoyed.”

The volleyball area fencing and concrete construction work is already in progress with sand and gate hardware to follow, according to Frederick Harris, Gavilan’s vice president of administrative services.

Gavilan will be one of only about 30 colleges throughout the state, including 10 in Northern California, to offer beach volleyball and only a select few that have courts on campus, according to Hannon.

“For a brand new sport, to be able to have those facilities and have them on campus, not only does have impact recruiting for beach volleyball but it is a positive for indoor volleyball as well because a lot play both sports,” Hannon said.

The baseball home and visitor dugouts have concrete walls in place, with roofing installation in progress and interior work to follow suit. The baseball backstop is also ongoing with fence pole installation with chain link fabric and padding to follow, according to Harris.

The softball scorekeeper booth’s concrete wall foundation is in place with wall and roofing installation on the way. Drainage, plumbing infrastructure and electrical underground is in place throughout the site, Harris said.

The restroom/locker room building construction is in progress with concrete curbs and walls set, while grading for landscape is ongoing, Harris continued.

“The college has spent a lot of time and energy to improve our academic programs and then add this element and it shows the college’s commitment to the overall experience,” Hannon said. “Gavilan becomes even more of a destination because of that.”