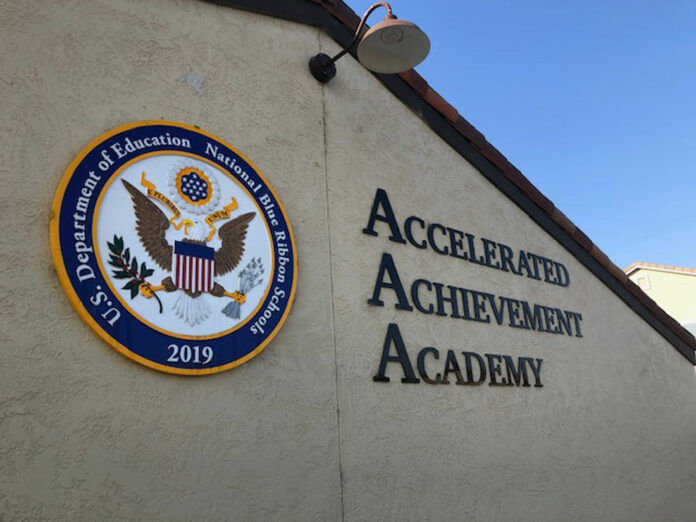 The Accelerated Achievement Academy in Hollister has been named the 11th best elementary school in California, according to new rankings published by U.S. News & World Report.

The U.S. News & World Report rankings included surveying performances of more than 7,850 elementary schools in the state. For the inaugural list, published rankings and data were released on more than 80,000 public elementary and middle schools across the country. National rankings are not yet available.

AAA is a “Project-Based Learning” (PBL) school with an enrollment of about 170 students this year and an expectation for 200 students next year. The district founded the school in 2008.

Scott Wilbur has been principal for the past five years. He lauded the staff for their “hard work and dedication and willingness to grow” and the students for their commitment to “learning at high levels.”

“They think about their thinking,” Wilbur said. “They work in teams. They answer higher-level questions.”

He underscored the staff and students’ commitment to a culture of kindness on campus.

“They work every day to create communities where people belong and are accepted and supported,” he said.

Wilbur noted AAA had a higher diversity and free and reduced lunch rate than any of the other schools in the Top 15 on the list.

While students apply to attend AAA, Wilbur said it is a misconception the school accepts only those who are extremely advanced academically. Students from across the district are eligible to attend AAA. He said the school’s focus is attracting students with potential who truly want to be there. Wilbur is especially proud of AAA’s partnership with Calaveras K-8.

“We are very lucky to share the campus with Calaveras,” Wilbur said. “Mr. Woods and I work with students at both schools and have worked hard to build a shared culture of excellence. We are fortunate that 30% of our students come from Calaveras. The staff at Calaveras do an exceptional job growing student scholars.”

The 11th-place U.S. News ranking adds to previous honors for the Hollister public school. AAA was named a National Blue Ribbon School for 2019, meaning it was among the top 1% of all public and private schools in the nation as measured by state assessments, testing and a rigorous application process.

Additionally, Wilbur emphasized the school has made great improvements in math, which was a priority when he arrived. He said there had been a gap of about 14 points between the school’s high-achieving English Language Arts (ELA) standards and its math performance. Within three years, AAA closed the gap and is now one of the only schools in the state with a high level of proficiency in both areas. Staff have implemented other new tools as well, such as student-led conferences.

Looking forward, AAA will continue expanding to two classrooms per grade, with eighth grade being the final piece of that transition in 2022-23. Even with the expansion, AAA maintains a culture where community is emphasized. It’s important that staff members are familiar with students even if they are in another classroom or grade.

“We know student names and we know what they need,” Wilbur said, mentioning an emphasis on social-emotional learning. “We know all of them. We build integrated teacher teams that support student growth over the years.”

Also looking ahead, the principal talked about plans for an engineering partnership with Amazon, development of a robotics program, and use of 3D printers and scanners. There are plans to bring back a school garden as well.

He noted that some of the top scholars at San Benito High School and the Gilroy Early College Academy (GECA) come from AAA.

“I’m super grateful,” Wilbur said. “Every day, I feel blessed to live in Hollister, come to AAA and be part of this. It’s the best assignment I’ve ever had. It’s a dream opportunity.”

Courtesy of the Hollister School District