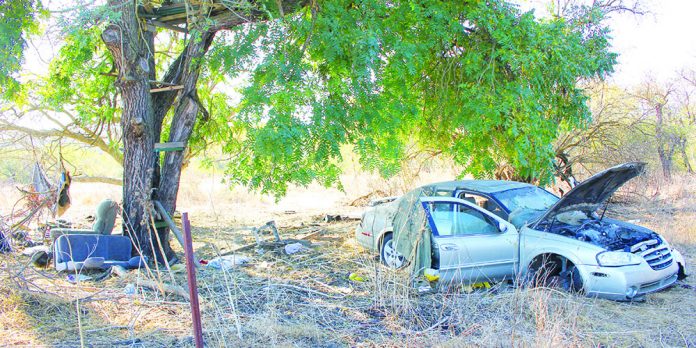 The San Benito River meanders under Highway 156 along the western boundary of Hollister, past the city’s waste treatment facility, through farmland and along expanding neighborhoods on its way to connect with the Pajaro River near US 101.

Upstream and downstream from Hollister, blackbirds, meadowlarks, deer, foxes and jackrabbits wander along its banks. In this milelong section of the river, tons of trash, tires, furniture, garbage, old TVs, trailers, abandoned vehicles and even boats fill the landscape.

Instead of a riparian sanctuary, for years this 90-acre site has been scarred by homeless encampments, trash heaps and dirt bike trails.

When it rains, much of the waste finds it way downstream to Watsonville and the Monterey Bay.

The owner of the property, Graniterock, has enlisted CHEER, an environmental cleanup non-profit and teams of volunteers from Hollister and Gilroy to clean up the giant illegal dump and restore its habitat.

When he first saw the property this summer, Herman Garcia, the 71-year-old founder of CHEER, or Coast Habitat Education and Environmental Reform, admits he was overwhelmed.

“The garbage was two feet deep all along here,” he said on a Nov. 22 walking tour. “You couldn’t see any dirt. The whole area was full of garbage.”

Rachel Reed, Graniterock’s environmental specialist, and Aaron Johnston, a vice president at the Watsonville building materials firm, enlisted Garcia’s help to remove the trash and restore the habitat. The company, along with Recology Inc., helped buy CHEER a new trash trailer for the project, and Garcia has been filling it almost daily since October.

“Most of the community is aware of the history of dumping along our local rivers,” Reed said this month. “At Graniterock, we want to set a good example as property owner to stop this illegal dumping activity. This is our first big project like this.

“CHEER has a proven track record of maintaining watersheds,” she said.

The work has been arduous—and rewarding, said Garcia.

In just one week, Garcia estimated his volunteer teams removed 21,000 pounds of trash from the banks of the San Benito River in Hollister. The total has exceeded 50 tons, he said, and the work is likely to continue until next spring.

On Nov. 21, Garcia said he and his assistant, John Graffigna, pulled out more than 50 tires and a trailer filled with junk. They take the trash to the San Martin transfer station, where fees are waived because of their environmental work.

Earlier in the month, Reed said Graniterock had to call the San Benito Sheriff’s Office to move out the remaining encampments of homeless people, who left behind clothing, toys and rusty RVs.

Garcia said he has pulled more than a dozen abandoned vehicles from the site, with another 10 or so remaining.

“A lot of it is years of illegal dumping from residents of this area,” he said. “A little bit, but not a whole lot is from the homeless—and then you have what seems like everybody in San Benito County abandoning their vehicles down here.”

Reed said Graniterock will be installing new “no trespassing” signs around the perimeter of the fence property, located just south off Buena Vista Road.

“It’s a beautiful habitat,” the biologist said. “We want to clean everything up and set a good example.”

“We have to hustle to try and beat the rain,” said Garcia. “Once it starts raining, there’s no access here until spring.