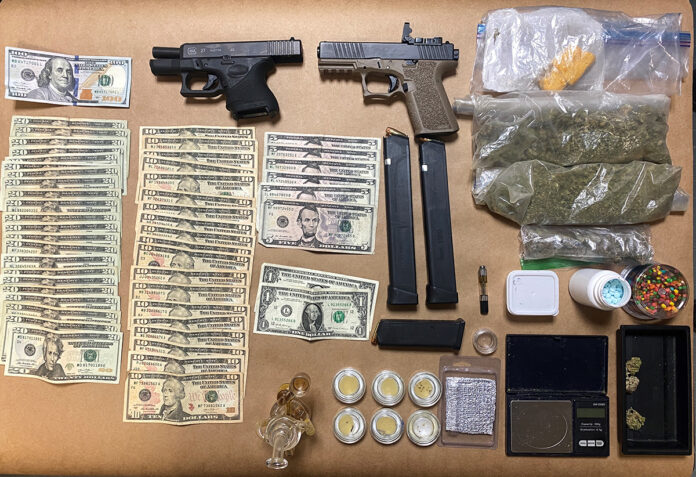 The Hollister Police Department announced that officers were able to seize guns, ammunition, money and other contraband during a routine traffic stop on Thursday evening.

Police officers arrested Daniel Ramirez, 20, on suspicion of multiple gun related offenses along with drug dealing charges and a probation violation on Jan. 28. He is being held at the San Benito County Jail without bail.

Ramirez was in possession of a loaded unregistered firearm along with a loaded “ghost” handgun that had been modified to be fully automatic, plus a handgun with loaded high capacity magazines, police said.

Officers also found multiple types of drugs packaged for individual sale accompanied with a scale and large quantity of cash, according to authorities.

Ramirez was spotted driving in the 100 block of Westside Boulevard when he was pulled over for a traffic stop on Jan. 28, police said. He attempted to flee on foot but Officer Rene Rayas caught up to Ramirez before he could get away.

Police said that “officers located a slew of illegal contraband and weapons.” Ramirez, who was on probation in San Benito County, was arrested on suspicion of 11 weapons and drug charges along with 70 counts of felon in possession of ammunition.

Anyone with information regarding these investigations can call Officer Rene Rayas at The Hollister Police Department at 831-636-4331. Those who wish to remain anonymous may call WeTip at (800) 78-CRIME and qualify for a reward.

In considering how to vote on measure Q, it...
Local News

With the Nov. 8 election rapidly approaching, this newspaper...
Crime

Police arrested a 27-year-old man on suspicion of domestic...